Commaful
Death Is More Innocent Than He Seems 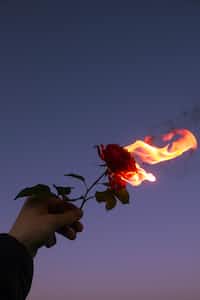 lovelace123 Imagine~
Autoplay OFF   •   24 days ago
Transcript Use Images
[Part 2.] A halfbreed? A prince of fairies and of demons? What is Death hiding...
romance romancecomedydemonsangelsfairiessuper naturalsupernaturaldeathaction

Death Is More Innocent Than He Seems

The crow first went forward, diving down until we were nearly touching the ground. Closing my eyes shut, I wrapped my arms around Death's waist.

Then for a moment in time, the crow bounded up before colliding with the ground into a meadow. They crashed against the grass while I clung desperately to...Death.

I hadn't realized I was doing it until it was too late.

"Hmm. We have a bit of a predicament," Death said, glancing at my arms around him.

My face burned in mortification, I hastily let go of him, and mumbled, "Sorry."

I was starting to wish we did plunge to our deaths so I didn't have to suffer the embarrassment. But then I realized he was Death, so I'd see him in the afterlife too...

Ugh, why did he have to be everywhere? Not that I really minded, but still.

While Death stepped off the crow looking absolutely gorgeous, I was sure I was a mess.

Of course, he was immortal so a hundred years from now wouldn't make a difference.

I sighed and jumped off, my short honey blond hair blowing in my face.

"Why did the crow drop us off here," I asked, studying the meadow for the first time.

It was just a simple clearing, small flowers spread about with evergreen trees circling the area. Sure, it was definitely pretty but nothing special.

There were gashes along the underbelly of the crow, one particular jagged wound carved into its chest. I flinched, knowing it would leave a painful scar.

"You may go Edgar," Death said to the crow, weariness surfacing across his handsome features.

"Fairies," I inquired as the bird slowly lifted up into the sky.

Against my will, my heart fluttered when Death's eyes flickered to me. A tired grin spread about his face causing me to wonder what possible had caused his exhaustion.

I'd known fairies were creatures with wings possessing magic but it was still strange to me.

A beautiful woman appeared in front of us, wings of gold stretched out from her back. Her long jet black hair blew loosely in the wind, eyes the color sapphire blue peered at us.

She held out a slender hand, a smile of pleasure gracing her lips when she noticed me gaping at her.

"I'm Virginia Lovelace," Her voice rang, flirtatiously batting her eyes at him.

"Fairies," Death muttered though I could see his cheeks tinged the slightest pink. He was blushing!

I smirked a little when he brushed past her and asserted, "Just take us to your mistress."

Annoyed but clearly interested, she nodded and revealed a little pouch in her pocket.

Fairy dust swept across the ground, a large flower blooming where it fell.

A fairy lay on the center of the flower, even more breathtaking than the first. Clothes of what appeared to belong to a goddess enveloped her pale skin.

"Ah, Ory," The fairy said. "I expected you to call much sooner. It's been centuries, my dear. Oh, I see you brought a girl. Hmm, your newest lover perhaps?"

The women gazed suggestively between us. I could feel my face burning fire engine red while Death tensed.

Cala cut him off with a raised hand.

"Mother," She supplied, giving me a coy simper.

I returned the gesture with my eyes reflecting off of the sunlight in a shimmering sea green.

"Mother," He continued. "We're in need of some assistance."

Nodding, the fairy listened through his story. She paused at each part he told and winked knowingly at me when he reached the end.

A tiny bit of me thought Death might've blushed but he turned away before I could tell.

"Take what you need, Ory, but before you go I would like to speak to Anna."

I stopped dead in my tracks, uncertain of what this meant.

Cala began to speak once her son departed, her lovely eyes staring intensely at me.

"My son is foolish to think you could survive this journey. Mortals are much more fragile than the immortal. Tell me, Anna, what do you think of my son?"

I didn't know how to answer, thoughts racing through my mind.

Snickers erupted from Virginia but stopped when her mistress glared at her. She whispered something to Virginia in a sharp voice causing the fairy to leave.

"Who could resist a boy part fairy? He has most of my looks but unfortunately also has his father's temper. You are playing with fire, my dear."

What a shame...someone as handsome as him, the son of a demon.

Cala had a look of regret on her face, twisting her lovely features into a scowl. "He is a prince of fairies and of demons. A halfbreed."

Despite her angry demeanor, the fairy spoke softly.

She grasped my hands and squeezed them gently. "Go, dear Anna. And, please, protect my son from himself."

As I walked to Death I noticed he stood idly, clutching a great white stallion by the reins.

The horse appeared utterly terrified of him and thrashed under his grasp.

I raised an eyebrow and jokingly asked, "Ory?"

Death frowned, dragging the stallion toward me, and folded his arms.

"A nickname my mother gave me," He responded, brushing the question off easily.

Shrugging, I gestured at the horse with a slight grin. "Why is there only one horse?"

The stallion nuzzled me with a fond expression but bucked when Death attempted to touch it.

"As you can see, horses are not a fan of me," He replied dryly.

I snorted. "And why would that be?"

Death offered the reins to me which I dutifully accepted, the horse seemingly pleased.

"They're a sacred animal of fairies," He explained. "And I'm only part fairy so I appear untrustworthy. They can probably sense the smell of death on me as well.

Have you ever ridden a horse?"

With a nod I placed my foot on a stirrup and slid onto the stallion's back. "Of course, I'm my mother's daughter after all."

That earned me a gentle chuckle, one that I could only describe as perfect.

I flushed a little at my thoughts and tried to act nonchalantly, convincing myself it was the hot wind against my face.

"We'll be heading to Seaosia next, it should take a month at most. Then you'll be on your way," He affirmed, his expression indifferent.

A fraction of eternity seemed to live within the silence that followed.

"Oh," I said, trying not to sound too disappointed.

Our eyes met for a long moment, not noticing the low growl sounding behind us.