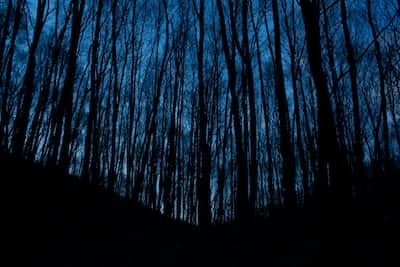 temprencemarie Community member
Autoplay OFF   •   3 years ago
Transcript
Fear is the most powerful force in the known universe. What can fear do to you?
thriller shortstorybash17fearno-for-the-faint-of-heartthriller

I opened my eyes to see trees. Endless trees. Stretching in all directions, to the ends of my vision.

I sat up in confusion and looked around, trying to remember how I got here.

Drawing a blank, I stood and turned in a circle, looking for anything other than trees but to no avail.

A drop of hot liquid fell on my arm, startling me. I looked up, towards the tree tops for salvation.

Instead, hot, sticky blood rained down the leaves, coating everything.

I closed my eyes and waited for the terror to stop.

I sighed in relief as the blood rain ceased. When I tried to move my legs, I found that they were heavy with foreign weight.

I opened my eyes and slowly cast them downward. A carpet of writhing, scaly reptiles had somehow wrapped themselves around my legs without my noticing.

A chorus of angry hissing floated up to me from the cobras around my ankles.

I screamed and started shaking the snakes off of me as fast as I could.

I freed my legs and began running through the sea of reptilian demons, crushing some with each step.

A long, sandy brown hooded cobra launched itself at me and sank its long fangs into my thigh. I yelped in pain and knocked it away from me as fast as I could.

I ran for what seemed like forever until the squirming mass of snakes suddenly dissipated into smoke beneath my feet, sending me tumbling to the ground.

Shakily, I stood and leaned against one of the many trees in this endless forest.

I turned to welcome whoever had come to rescue me from this hell, only to behold the blank and hollow stares of the children.

Their cheeks were sunken, bellies swollen, and ever rib easily counted.

They came in all sizes and colors. Tall and short, dark and light.

Tears ran down their hollow cheeks, for hunger gnawed at their stomachs like a wolf does a bone to get the marrow.

Faster than thought, they’d surrounded me, tugging at my blood soaked clothes, sobbing, begging for food.

Slowly and suddenly, a golden fog descended upon.

They children fell, retching and choking as the pungent odor of mustard mixed with that of blood as they drowned in their own blood.

I stood, petrified as the life left their bodies in shuddering gasps.

From their still forms crawled millions of tiny, black spiders. They moved towards me in a tidal wave of fury.

I screamed and lurched backwards.

I turned and hightailed it through the forest, tripping over the gnarled roots and whimpering, plaintively.

Finally, I stumbled and fell onto my hands and knees. The spiders overwhelmed me in a wave of creepy, crawly arachnids, crawling over my skin.

The spiders overwhelmed me in a wave of creepy, crawly arachnids, crawling over my skin.

I rolled around on the forest floor, trying to crush the masses of spiders, but they scuttled off of me and made a huge, loose circle around me.

The fire surrounded me. I turned in a circle, trying to find a way out, a way to safety.

I spotted a break in the flames and hurdled through it only to find the treetops above me alight with the destructive glow.

I screamed as they burned me and I started to run, without direction, through the blazing forest.

I stumbled along until I found a small but deep pool and dove in, trying to evade the hateful heat.

When I resurfaced, the trees were gone, and the forest was replaced by burned stumps and dry, cracked earth.

I crawled out of the pond and crouched on the parched ground, my head in my hands, wishing that this would all end.

The sun blazed hotter than the fire that destroyed the forest, forcing me to stand and look around for some kind of shelter but to no avail.

Heat bounced off of the ground in burning waves while buzzards floated aimlessly above me.

I cried out with joy as I saw purple, snow capped mountains in the distance.

I began to walk briskly towards them until I realized that those saving mountains weren’t getting bigger. Instead, they seemed to be getting smaller with every step I took.

I screamed in frustration and stomped my foot like a child throwing a tantrum. A crunch brought my eyes downward once more.

I choked back the vomit that tried to force it’s way up my throat when I saw the skeleton that I’d just put my foot through.

Hyperventilating loudly, I tugged my foot from the dead man’s ribcage.

I stumbled back, the empty eye sockets staring at me and the bleached mouth grinning grotesquely.

I slowly turned and found myself facing a different grin as an enormous black wolf bared its long, yellow teeth and snarled.

I stilled, hoping it would lose interest in me and move on.

Instead, it let out a bark that sounded more like a roar, blasting me full in the face with its hot, rancid breath, making my eyes water profusely.

It crept towards me ever so slowly, clearly taking its time, and stared at me with narrowed, unblinking eyes.

I held my ground and suppressed the whimper that bubbled up inside of me.

The wolf got closer and closer growling menacingly.

I took a step back, accidentally kicking a rock, making it clatter against the hard, dry ground. The wolf's eyes turned to the stone for a moment, giving me a chance to run.

I sprinted across the packed earth, the wolf following close behind.

I tripped and fell. The wolf, taking this as an opportunity to kill me, jumped on top of me. Just before its jaws closed around my throat, its image was scattered on the wind.

I curled up in a ball and waited for some other unimaginable terror to come along and kill me.

When apparently that was too much trouble for the world to grant me, I stood up and screamed at the sky, “Why don’t you just kill me already?!?”

The ground rumbled beneath me as pieces of the earth fell away, making a circle of emptiness around my little piece of land.

“About damn time.” I growled.

I threw myself towards the darkness, ready to embrace it, when I hit an invisible wall that threw me back. I tried turning around and repeating the action and met the same barrier.

I frantically felt the seemingly non-existent barrier, all thoughts of death forgotten.

I finally realized that I was trapped on a tiny piece of rock in a hole, God knows how deep, in the middle of nowhere and I’m all alone with innumerable dangers hiding in plain sight.

Panic began to set in and I sat down, and tried to think of a solution.

I was sitting for less than five minutes before I couldn’t deal with the deafening silence.

I pulled my knees up to my chest and put my hands over my ears so that I couldn’t hear anything; or lack thereof.

I sat there listening to the somehow soothing sounds of my own heartbeat and breathing. Is this what it’s like to go crazy, I wondered.

Suddenly, the ground shook again and sent me falling towards the chasm. I yelped and grabbed the tiny ledge and desperately tried to hold on.

What little rock I was able to grab cleaved off, sending me down, down into the abyss. As I fell, I began to feel sleepy. And so I dreamed...

I opened my eyes to see trees. Endless trees. Stretching in all directions, to the ends of my vision…