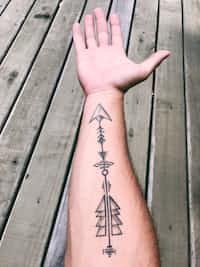 starrycloak Community member
Autoplay OFF   •   9 months ago
Transcript Use Images
A waitress meets a man she can't forget. Why is he so mysterious? Is there something to hide?
romance fiction/roma

He was unlike any man I had ever met previously. He had a restless air about him. Shifting hazel eyes, sandy-blonde hair, cut shoulder-length. Under his left arm was a tattoo of an arrow.

He had a mustache and wore rather dirty clothes.

He entered with another man, who had darker hair and was rather sluggish. Sandy-blonde took a seat in a booth, sliding to the far corner, and took a long look around the room under his brimmed hat.

Once he had analyzed everyone, he took his hat off, and ran his hand through his hair. They ordered some wings and his companion had liquor. He, however, only took glasses of water.

They talked in lower tones, which meant business. Whenever I would come to check on them, they would stiffen up, and take turns glaring at one another when the other spoke to me. I found this halarious.

It soon came to an argument, and the second would keep making some demand, but the first would only laugh and take some water. Soon, the second man became very angry and intoxicated.

That was when he paid the bill, I noticed, with the drunk man's pocketbook. But he tipped. And he tipped well. He helped the other to his feet and they were gone.

I soon began to see this man more often. He would arrive, always take a seat at a table I was waiting on, and order the same thing: extra hot buffalo wings with ranch and water.

One night, he introduced himself. "I'm Twenty, by the way." he said, sticking his hand out for a handshake.

We shook hands and his grasp was firm and warm, unlike the cold, limp handshakes which seem to be in vogue nowadays. I became familiar with his comings and goings.

He asked me about myself and my life. I answered discreetly, and whatever questions I would put to him, he would answer just as carefully. Our relationship became a rather guarded interest.

One night, I missed his coming. I looked for him the next, and the next. Still, no Twenty. A week, then a month passed. Two months. Then three.

On the fourth month, I had given up all hope of seeing him again. I blamed myself for not being more open with myself about my feelings for him. And now he would never know . . .

He was probably in a real relationship by now.

But one night, who should come through the door and take his regular seat? The man whom I had thought I should never see again. Yet, here he was, and relief spread through my body.

I tried to steady my nerves as I prepared to take his order, even though I knew it would be the usual.

But as I stood before the table, I instantly sensed something was wrong.