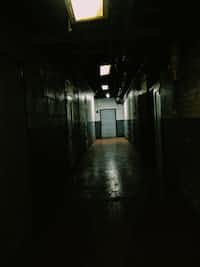 solomonstump I am 13, but good at writing and coding.
Autoplay OFF   •   a month ago
Transcript Use Images
A suspenseful horror story that will leave you sitting on the edge of your seat. WARNING: contains blood. Meant for people age 13 and up, though some people this age may feel irritated or distressed when reading.
thriller horrorthrillerscaryspookyhalloweenscpcreepydarkscareunsettling

Once there was a boy in a happy house living a life he thought was normal. His mother and father had died in a car crash six years ago.

He now lived with his uncle in the same house, but there was an unsettling feeling about it that he would have to live with for the rest of his life.

One day his uncle came into his room. "It's time to go to school," he said. The boy woke up frantically and gazed at his uncle's pale, blue eyes. Something was wrong with them. It was like they were staring through him.

Something was clearly wrong with him. "I have to get ready for school," the boy said suspiciously. "It's time to go to school," he said again.

"Okay," the boy said, skeptically eyeing his uncle. He then got in the car and drove to school, still in his socks and pajamas.

"Goodbye," he said, getting out of the car as he turned to look at his uncle. He jumped back with a jolt of fear. No one was in the car. Where could he have gone? He looked at the front seat. It was abandoned.

He walked cautiously into the school, his heart in his throat. It was empty. No one was there. Not a single person could be seen strolling through the halls.

"Hello?" he said, his voice echoing off the walls. "Is anybody there?" He looked at the ground. A pang of terror aroused in his chest. A trail of blood streaked across the floor.

His heart was pounding. Ever so cautiously, he followed the trail. Bloody handprints were smeared on the ground as if they were trying to crawl away from something.

His heartbeat became louder and louder as his footsteps became faster and faster. He then came to a stop. He found himself in an empty classroom with broken chairs piled up against the wall.

The trail stopped here. There was no body on the ground, no source of the blood. Then, suddenly, he heard footsteps behind him. His heart was screaming. He was paralyzed with fear.

The footsteps became louder and louder until they stopped right behind him.