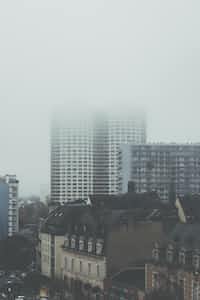 rbsheehan Community member
Autoplay OFF   •   a month ago
Transcript
He's looking for an end. She's looking for a beginning.
fiction flash fictionflashfictionfictionsuspensemysteryshort storyshortstory

*Why am I doing this?* she caught herself wondering along with an icy sigh.

*Does he even deserve it?* Her numb fingers fought to maintain their waning grip on the frozen rope as it writhed for freedom.

She realized she should've questioned this task long before it began.

Braving winter's wind atop this 10-story parking garage, her heart racing, her interest fading, she finally heard him speak.

From the other end of the rope, somewhat invisible through the twilight fog, his voice cried out "Please, whatever you do, don't let go."

She never wanted to let go of something more in her life. "I won't," she replied with not-so-subtle hesitance. She never thought she'd be in this position, but she couldn't turn back now.

She was in far too deep. *What will people think of me?* More qualms crept through her mind as her toes turned to ice. *What will my parents say when they find out what I've done?*

He, too, was struggling. But his troubles weren't with ropes or freezing temperatures, rather with his desire for life, for happiness, for love.

He couldn't remember the last time he felt anything of the sort. Ages of fighting this solitary beast on his own left him desperate; he couldn't take it any longer.

He finally found someone, skeptical but willing, and brought her here. He knew he needed help, as this beast was beyond his strength to conquer alone.

With no remorse for his neglected responsibilities, he continued the preparations.

*I'm just happy she agreed to this,* he thought as he wrestled with the beast once more. After all his suffering, after watching his spark fade to nothing, he knew it was finally time.

"I'm ready to let go!" he shouted shakily back to her, "Are you ready?"

Although reeling with disbelief, deep down, she had a feeling this would give her some sort of weird thrill.

Silencing the last of her shame and embarrassment, *fuck it,* she thought, she was ready. "Do it!" she shouted back, flattening the final nail in the beast's coffin.

Her words, sailing on a serendipitous gust of frigid wind, pushed him to free the beast. Time slowed as his eyes rose, watching the rope, the beast, the pain float out of sight.

This was his idea, his choice, his responsibility. In that moment, he regretted nothing. The end of his suffering had finally come.

With a sudden immunity to the cold and a titan's grip on the rope, she gasped at the scene unfolding before her eyes. A slight smile crept over her face.

*Why am I enjoying this? Should I feel guilty?* she wondered, as she felt no guilt whatsoever. *Is this who I am now?*

Minutes passed. She hadn't moved, stunned in the light of this newfound joy.

"Well, was it everything you hoped for?" he asked playfully, now standing at her side, wearing the largest grin he'd worn in years.

She let out a light laugh. "It was better than I expected!" she exclaimed with an honest smile. "I love the dragon, too! So cool." They watched together as it continued to fly through the fog.

She never thought she'd fall in love with an extreme kiting enthusiast.