Commaful
Save a Soul 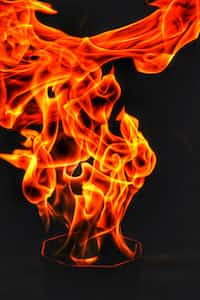 ratlord post about dreams/will reply to comments
Autoplay OFF   •   a month ago
Transcript
This is my dream.... Um... As usual, the names have been changed by a random name generator. All except an obvious character that everybody knows. Anyway, this is all of my dream that I can remember.
feelings dreamdreamsdreamt

I don't remember much of what happened. I remember me and Nathaniel (my sister's boyfriend) were playing cards in the living room. Everything was going fine.

Dawn, my sister, was in her room doing something that was causing a bit of noise. A few seconds later, she burst out of her room in a flash. "I might've sent your sister to Hell.

" Malachi gave a concerned look and stood up slowly. "What?" She smiled awkwardly at him while messing with her hands.

She tried to explain as she walked into her room, where the lights were broken and the room was lit red from a giant pentagram on the ground.

Objects were flying around the room in a circle around the pentagram. After we stepped into the room, everything dropped and it stopped glowing.

Dawn grabbed a book on her dresser and prepared a new seance on the ground. She put candles on each point of the star.

She lit them in a counter-clockwise pattern and began chanting, saying everyone's name afterwards. Me and Nathaniel stood there, confused and concerned.

To our surprise, a red hole opened up and Dawn hopped in. We took a few steps forward and her arms reached back out and pulled us in. We fell down, spiraling.

I blacked out and woke up in a dungeon-like castle colored all shades of red, black, and (surprisingly) a little yellow. Nathaniel helped me up and Dawn was brushing herself off.

A bright red door opened and on a giant throne of spikes and skulls sat a handsome man with pitch black hair, bright red eyes, and twisted horns. His red eyes appeared to glow.

He sat in a pitch black suit with a red tie and red shoes. His legs were crossed and his foot tapping against a skull impaled on a spike.

He gave a mischievous expression when he spotted Dawn and lifted his arms out. "Dawn!" He said in a deep and knowingly voice. My sister smiled and took a bow.

"Come, come!" He said, motioning for her. My sister practically skipped over to the throne and sat on his lap. She began chatting when Nathaniel shouted aggressively from across the room.

"That's MY girl!" The man looked up with his eyebrow raised. With a click of his tounge the shape of a snake's, he said "Oh, honey, please.

" I couldn't help but think to myself and wonder if he might be gay.. or at the very least, some sort of sexuality attracted to men. I could hear it in his voice.

No straight man would say it like THAT. AND with a click of his tounge. Nathaniel clenched his fists and relaxed his shoulders.

The man on the throne chatted with my sister for a good 20 minutes. I couldn't help but chime in once he looked in my direction and said "You seem curious. Go ahead.

After all, curiosity killed the cat!" I practically shouted out a few questions without thinking. Except, one question made his eyebrows raise.

"Are you Satan?" His body moved back slightly and his expression went numb. I noticed he had small but razor sharp teeth. His eyes went a bit dull. "Yes, I am.

" Dawn hopped off his lap and he stood up. Wings sprouted from his back and the glowing red "sun" lifted up behind him through the window. He gave me a look as if to say "bask in my power.

" Dawn clapped her hands softly and excitedly. "How come you and Dawn are friends?" I bursted out once more. "She's a Christian." He sat back in his throne and his wings disappeared. "So am I.

" He seemed annoyed at this point, so I stopped myself from asking another. He snapped his fingers and a closet appeared. He opened it and grabbed out a few clothes, handing them to dawn.

"Wear these. You'll blend in. Like a mafia member or leader or something." She put on a beautiful black dress and a white fur coat over it.

" Everyone was a demon though. Everyone had a tail, horns, wings, goat eyes, or a combination of two or more. As we walked through, no one touched us.

Probably because on Dawn's fur coat, a red S was embroidered, probably meaning Satan. After a few minutes, however, a girl recognized Dawn.

"Dawn? Hey, it's Jordan!" She wore a neon-and-black-colored tank top with matching shorts and a hat. She had one black eye (literally the pupil+white part were black) and Sienna-colored skin.

Her hair was black and mostly covered by her hat. She chatted with my sister a little bit and we eventually decided to just bring her with us.

After finding out a few things about a "newcomer" that fit Lily's description, we went to Madame Baitson and began talking to her.

I felt uncomfortable there and tried leaving as soon as possible. Unfortunately, on our way back, I fell behind because of my short legs and short steps. A man picked me up and into the air.

My shawl dropped and I began screaming. Somehow, my group was gone. He had to be about 7ft tall, because he seemed like a giant to me.

He tried shoving me through a portal-door, but I planted my hands on each side and refused to go in. He kept pushing and pushing and eventually I ducked and ran away.

He caught up to me and snapped my arm. I blacked out again and woke up on a couch. The man was staring at a list and excitedly giggling. I looked over to find my arm almost purple.

He had surely broken it. I grunted in pain and tried crawling off the couch. Unfortunately, I only managed to fall off before the man noticed what I was doing.

He grabbed a wrench and began walking up to me. This must mean he knows I'm living. Before I could think, Nathaniel punched the man across the face and didn't stop punching for a while.

Dawn stood in the doorway with Jordan and Satan behind them both. He walked up to me and laid a kiss on my arm where it was broken. I winced and it healed before my eyes.

The purple faded and I could move it again. I stood up and we decided to continue going.