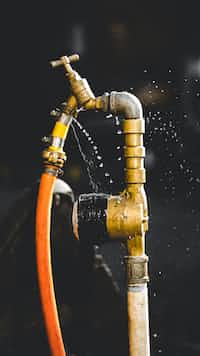 "Yes, we do have plumbing issues." Jamal winked at me.

I couldn't comprehend what he was trying to tell me. "Say again?" I said.

"We have not one, but at least a couple more plumbing issues."

Sometimes Jamal could be this annoying intellectual. He was responding to the incident that I just shared with him. His eye winking and cryptic talk were not helping my present sour mood.

You see, I was just venting out to him about an incident at my home with my 15 year old daughter.

I had poured a drain opening liquid into a sink that was slow to drain.

When my daughter entered the bathroom I told her not to use that sink as the drain opener needed some time to do its magic. Pouring water through the plumbing lines would drain it away too soon.

After just a couple of minutes, she opened the sink's faucet, forgetting that only moments ago I had advised her not to do so.

What ensued was my yelling at her for being forgetful and irresponsible, and she running to her room crying and yelling back at me to never talk to her again.

I sighed and pleaded to Jamal, "Can you please be helpful here? "I don't feel too good after yelling at her. "But she has to learn to be more responsible."

"What in the world?" As my words drawled, Jamal started laughing.

Then, switching to a serious tone he said, "Dude, you know how important plumbing systems are, and how invisible they are too, until they cause problems?

"Our subconscious habits are similar to the plumbing systems in a building. "They help us carry out routine tasks such as driving very efficiently. "But sometimes these behaviors can be counter productive.

"That's what happened to your daughter and you today.

"She opened the faucet out of an ingrained habit, and you yelled at her because you probably have a habit of thinking that she is irresponsible.

Jamal's quick analysis was eye-opening to me. I decided, as soon as getting back home, to apologize to my daughter for my impatient behavior. I resolved to identify and challenge any negative judgement I had about her behavior as well.