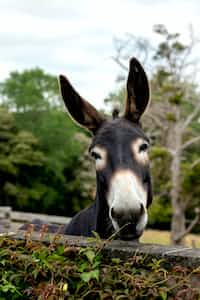 pratanubanerjee 58 featured +590 followers
Autoplay OFF   •   a month ago
Transcript Use Images
Donkey has a scientific name - Equus africanus asinus. It has been domesticated member in horse family known as Equidae.
thoughts donkeystatisticseconomics

Statistics, Economics and Research on Donkey

It has been domesticated member in horse family known as Equidae.

The donkey has a wild ancestor, African wild ass, whose scientific name is E. africanus.

It is the working animal for 5000 years approximately.

It has been estimated that there are 40 million donkeys on the earth.

They are found in underdeveloped countries!

They are regarded as pack or draught animals.

As per Domestic Animal Diversity Information System of FAO, about 189 breeds of ass have been listed in June 2011.

The rise in number is due to recognition of the donkey breeds.

It had been undertaken by Animal Genetic Resources project of FAO.

The recognition rate of new breeds was high in developed countries.

Baudet de Poitou is a breed in France identified before early 1990s.

Within 2005, they had recognized 6 breeds of donkey.

About 3.5 million donkeys along with mules have been killed per year for taking their meat across the world!

It is really a sad story!

The equine meat is taken significantly in Italy.

In Italy, donkey meat has been primary ingredient of regional dishes.

We received 100 tonnes of meat.

The milk of asses are in great demand.

They are utilized as cosmetics and soaps.

They are important for dieting.

Thank you for the amazing writing opportunity!

@shadowdream said: A very fascinating post! So sad that they are slaughtered for meat. Jesus entered Jerusalem on a donkey in Mark, Chapter 11.

@lauri_bear : Well done, I really love this! 🤩 May be my fav from yours!