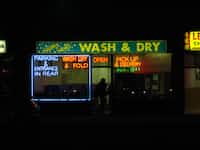 parallelogram omnia suspensa iuvenci
Autoplay OFF   •   4 months ago
Transcript Use Images
Hideous things aren't real until you find them. "I don't like the laundromat" will be a series of very short stories about a character who keeps going back to a place they should not return to.
thriller thrillershort storyshortstoryshortstoriesshort storieshorror#thewrongbasementto be continuedweirdeerie scariest eerie stories

Why would anyone run away from home? I don't even know if I mean to phrase that as a question. It seems like more of a statement when other people ask me, which makes it even more difficult to answer.

Why did I run away from home the first night? That's what I mean to ask myself, as now, people have stopped asking me.

So I simply think about it over and over again, always reaching varying conclusions. But if I think hard enough, and I really try to find what has eaten away at me, I will confront what I seek.

I have mentioned it before, but to elaborate, I will tell you more about the laundromat. You cannot know anything else about my experience until you know just enough about the place I speak of.

The laundromat is nothing more than exactly what it sounds like: a laundromat. Although, I have mentioned before that there are some things that separate it from the rest of its kind.

Now you may ask, what separates this laundromat from the rest? Or perhaps you have already guessed. The answer is time.

When I go to the laundromat alone, and I mean completely alone, at three in the morning, it becomes incomplete. It is the threshold of undying hours and unfamiliar haziness.

It peaks at these times, three or four in the morning, sometimes even two or five. But never again, until the next night.

You've probably been in one of these places. I've learned that they are called liminal spaces. A place that is somewhat of an "in-between". You are in a space between one thing and another.

Liminal spaces are more common when you are going through one place to get somewhere else. Like airport lobbies. Other times, the heavy feeling is created by you.

Ultimately, you make what you can of a space, which is how I thoroughly ruined the laundromat. It's "Open" sign asks me to come in. The lights are always turned on even after dark.

It doesn't help that the doors are always unlocked. I don't know who the owner is. Sweatshirts and jeans are always in the washer, even when no one is there.

Abandoned shopping carts move with the wind in the parking lot. The floor changes color with the sign outside. The lights shift between red, blue, red, blue, black. And it stops.

I look up from the ground and my eyes meet a figure that quickly fades into the background. I turn away. Then again. Red, blue, red, blue. Blue freezes, leave slowly.

Something is moving carefully in front of the lights. I jump up and take a few steps back. I can't focus on the fleshy blob that slides across the window panes, so I run. I hide behind a dryer.

Then I hear it. Strong humming that only gets louder. Everything shakes in my mind, but not in real life. Fingertips numb. Then it leaves. And I leave as well. And I forget. Only to return again the next night.