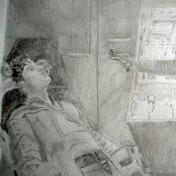 nomidarklighter Rebellions are built on hope.
Autoplay OFF   •   2 years ago
Transcript
A short story about Poe Dameron's imprisonment aboard the First Order Star Destroyer "Finalizer".

Poe Dameron knew since the moment the stormtroopers seized him and dragged him to their black dressed and masked leader, that he made a mistake. A deadly mistake.

Now he was on a Star Destroyer of the First Order and he was pretty sure, that there would be no escape.

Soon the interrogations would begin and he wasn't sure, how long he could resist the torture.

He regretted that he was unable to swallow the poison capsule, that each Resistance pilot got in order to avoid falling in the hands of the enemy alive.

His thoughts were interrupted when the cell door opened and two stormtroopers entered. One of them took brutally his bounded hands and forced him to stand.

"Come, Resistance scum!" They drove Poe through a long passage. When he became slower, they hit his knee pits with a blaster rifle muzzle and he stumbled. Again he was brutally forced to stand.

He knew what would come, would be far more cruel than this. He shivered.

When they had finally arrived their destination, the stormtroopers pushed him in a room, which was dominated by a strange looking apparatus.

One of the stormtroopers loosened his handcuffs and together they pulled the resisting pilot on the apparatus and fastened him firmly. Then they left him alone and closed the door.

When the door opened again, a man in an officer's uniform entered the room. Behind him floated an imperial interrogation droid. Poe swallowed hard, when the droid floated toward him.

When Poe Dameron regained consciousness, he found himself again in the arrest cell. His head ached terribly and he tasted blood in his mouth.

He lifted slowly his bounded hands and swept his face. He winced, when he grazed a wound under his right eye. The officer has really did a good job with his interrogation droid.

Again and again he had asked about the whereabouts of the map, which Dameron received from Lor San Tekka on Jakku, before the First Order attacked the village. Only this single question.

And each time the pain were more intense, which he had to suffer. Finally he couldn't bear the pain any longer and lost his consciousness.

He didn't told anything and he hoped, that his astromechdroid BB-8 would have enough time, to bring the map to General Organa in the Resistance headquarter.

But he was aware that they would call him again soon. He wasn't sure, if he could hang on.

Poe Dameron had lost track of time and didn't knew how many times they called him from his cell and tortured him. This time they even didn't bother to bring him back in his cell.

They simply left him in the apparatus, which he called torture stool in his mind. He felt blood trickling the left side of his face.

When the door of the room opened, he expected to see one of his well-known tormentors. But it was another one, who entered the room.

It was the black dressed and masked man, who had the supreme command during the attack on the village in the Kelvin Canyon. He approached Poe and asked as to scorn, if he is comfortable.

It seemed that he knew exactly who Poe is. Then he said: "I'm impressed. No one has been able to get out of you, what you did with the map.

" The pilot didn't want to show weakness and answered: "Maybe you rethink the technique."

Suddenly the black dressed man lifted his hand and Dameron felt an uncanny pressure, when his head was pressed back.

"Where is it?" Because of the overstretched neck he had difficulties to swallow. He struggled for breath. He resisted desperately. The pressure in his throat ceased.

Then he felt it and he nearly vomited. Something, no, someone had penetrated his mind. This groping search with invisible fingers in his brain made him nearly mad. He screamed.

Before he lost consciousness entirely, he heard his torturer say to a ginger-haired officer that he would know now, where the map was. They now had no reason to let him alive.

When Poe regained consciousness a stormtrooper stood guard. A second stormtrooper came in and said: "Ren wants the prisoner."

The stormtrooper released him from the apparatus, shackled his hands and drove him out of the room .

Poe Dameron was prepared to die. He only regretted that it wouldn't be in battle.