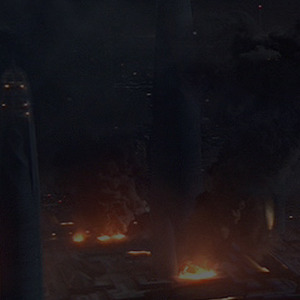 nomidarklighter This is the way.
Autoplay OFF   •   4 years ago
Transcript Use Images
I wrote the story, because I don't like the thought that Anakin slaughtered the younglings. Therefore I let a small group escape along with their Jedi Master and her friend.

The Jedi Master Alliya Sunbeam awoke with a start. Thoughtful she looked in the surrounding darkness.

Would these memories haunt her for the rest of her life? It was many years ago, but the images still plagued her. Images that she desperate wanted to forget.

But she couldn't get it out of her mind. There was no forgetting and no peace. Even not, when she was together with the younglings she saved, who were grown up to young men and women.

Constant concern, that the Emperor's henchmen will find the alleged place of refuge, were her companion. Alliya asked herself, why nobody in the temple felt what will come.

She wrapped the blanket closer around her shivering body, as she deliberately recalled, what took place at the Jedi temple.

The day began peaceful, despite the war with the Separatists, and there was no hint that he would end in blood, chaos and violence.

All were doing their tasks and Alliya was on her way to the training area with a group of younglings when she heard shooting and screams. The children looked up to her in bewilderment.

The tall Jedi shook her head. "I don't know, Sahima. Maybe the Separatists invaded the temple." But in the same time she denied her answer for herself.

It seemed impossible to her, that this could have happened. No, the intruders must be others.

She put a finger on her lips and gave the younglings to understand that they have to be calm. Then she spoke under her breath: "Stay here. I will check what's going on."

She opened the door, stepped out and bolted the door. Cautiously she went and peeped into the large passage, which led to the temple entrance.

She was frozen in terror, when she saw what's going on.

Clonetroopers shot merciless at everybody, not even the youngest were spared.

Dozens of dead Jedi, with still smoking bullet holes, laid on the floor.

'This can't be,' Alliya thought, 'the clones are serving the Republic and they are fighting side by side with the Jedi against the enemies.'

Suddenly she saw through the billows of smoke, Anakin Skywalker. She was nearly on the way to approach him, when something hold her back. Confused she looked on the scene before her eyes.

The clonetroopers didn't shot him, like the other Jedi, but saluted in front of him. Skywalker nodded and pointed to the Jedi library.

The clones started moving there and were disappeared from Alliya's sight, when a Jedi jumped out of cover and attacked Anakin.

Nearly casually Skywalker ignited his lightsaber and parried the attack. The duel was short and after some standard minutes the Jedi laid dead to Anakin's feet.

Skywalker turned and followed the clonetroopers to the library.

Suddenly the Jedi Master knew for sure, that Skywalker was no more one of them. Without any noise she left her observation post and went to the room, where she had left the children.

When she opened the door, she looked in scared faces.

She considered feverish, what should she do now. She had to bring the children out of here, at all costs.

But how could it be done? Alliya was sure that the younglings wouldn't keep quiet when they saw the corpses. But it was the only possibility to bring them safely to the temple's vault.

From there, they could vanish unseen in the urban canyons of Coruscant. If they have managed this, she would find a way to leave the planet and bring the children in a safe place.

Calmly she tried to explain the children, what will await them at the outside.

Speechless the children looked at the Jedi Master. Finally a little Bothan boy took her hand and spoke under his breath: "We will come with you, Master Alliya. Bring us away from here.

" The other children nodded approving and crowded round the Jedi Master.

Cautious she opened the door and peered in the direction of the great hallway. The coast was clear and she waved her hand, that the children should follow her.

From the distance they heard still blasterfire and screams. The temple burned and they could smell the fume, when they climbed over the corpses in order to reach the vault.

Now and again the Jedi Master bent down and wrenched a fallen Jedi the lightsaber out of the lifeless hands. The dead had no longer use for it, but maybe the living.

Alliya turned when she heard a suppressed sob from one of the children and shook her head. The sobbing ceased fast and they continued their way in silence.

Finally they reached the entry to the vault, where Alliya gave each child a lightsaber. Tiny hands, paws and claws run unsure over the oversized weapons.

The Jedi sighed at this sight and hoped strongly, that there would be no battle, where her fosterlings wouldn't have any chance.

She ignited her lightsaber and strode, followed by the younglings, in the, because of the power failure caused by the fire, unlit hallway.

They had nearly reached the exit, when Alliya suddenly paused. She indicated the children to stand still at the sidewalls, whereas she moved forward.

Before her appeared a shape in the weak light of a blue lightsaber blade.

She approached carefully, always ready to ward off an attack. The shape came just as carefully to her. Finally there was only one length of a sword between them.

Relieved saw Alliya the well known face of Dusty Mort. When she was a young girl, she made together with him the first steps in their Jedi training.

Dusty's face was contorted with pain, but he managed nevertheless to grin at her.

He pressed his hand on a wound in his right side and shook his head, before she could say anything. "It' s nothing, Alliya.

Are you alone?" Instead of an answer the Jedi waved with her lightsaber and Dusty heard the scamper of tiny feet.

Shortly afterwards he was surrounded by younglings, who hopeful looked up to him and Alliya. Despite the situation Dusty laughed. "I could have thought that you bring along your younglings.

But let us leave now, before the clonetroopers come here."

They really managed to escape. The Jedi Master thankfully remembered the freighter pilot, who brought them and their fosterlings, without any questions asked, to their refuge.

Here they were safe since many years and maybe with Dusty's help her tormenting memories of Anakin's betrayal of the Jedi would fade away.