Commaful
Memories of a Lost 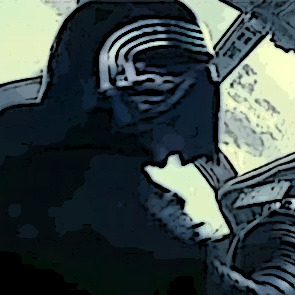 nomidarklighter Rebellions are built on hope.
Autoplay OFF   •   2 years ago
Transcript
In a deleted scene you can see Kylo Ren aboard the Millennium Falcon. Here's a short story what he could have had in his mind.

Memories of a Lost

When the stormtroopers assure him, that nobody's inside the YT-1300 freighter Kylo Ren enters the old dented vessel.

He inhales the odor, that he once was used to smell. But through his mask it smells somehow odd. Kylo looks at the well-known midsection of the ship, with the Dejarik table.

He remembers very well, how often he has played a match with his father.

When Kylo enters the cockpit the memories of the past, of his past, are almost overwhelming. He sees himself, no his former self Ben Solo, sitting at his father's lap.

Tiny fingers gripping the lever to activate the hyperdrive. Those moments together with his father were rare. But when they happened, they were full of joy, adventure and excitement.

But there came a day all changed. Ben was sent to his uncle to learn the ways of the Force. It was the last time he was aboard the Millennium Falcon till now.

Suddenly Kylo recognizes that he's giving in to sentiment. Han Solo's here and this means danger. He must stop him.

Maybe facing him would be the test Supreme Leader Snoke mentioned.

Kylo's not sure what he'll do, when he'll meet the man, who he no longer calls father. Maybe he'll kill him and maybe his inner pain will finally end.

He leaves the Millennium Falcon and hurries back to the base. Ready to face his fate.