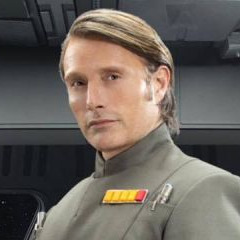 nomidarklighter Rebellions are built on hope.
Autoplay OFF   •   2 years ago
Transcript
Galen Erso in the night he made the hologram recording.

Galen's Revenge - A Rogue One Story

It's night at Eadu. Galen Erso sits in his laboratory. It's calm in the facility. Too calm for his taste. When the night comes, the memories are coming too. Memories of his former life.

Galen clenches his fist. Orson Krennic - the man he once called his friend. He realizes that this man never was a friend. Krennic used him for his own plans. He still uses him like a tool.

When the truth broke upon Galen, he managed to flee and hide together with his family at Lah'mu. Till the day Krennic has found them.

Now he was a Hero of the Empire, what means nothing else than a prisoner. They use his research to create a super weapon. A weapon which can destroy entire planets. They call it the Death Star.

A name which really fits. How many deaths it has already caused? Not only his wife, there are much more.

Scientists who were vanished or felt victim to an accident, when they refused to stay in the weapons research programm.

He has to end it. Once and for all.

Galen has built a flaw in the weapon. A flaw only he know it exists. One hit near this flaw and the whole battle station would explode.

He has wondered how he can inform the Alliance about this flaw. And one day a plan came in his mind. He has befriended a young Imperial freighter pilot, named Bodhi Rook.

The young man came from Jedha, a planet where the Empire plunders the Kyber crystals of the ancient Jedi temple.

Galen learns from Bodhi that Saw Gerrera, an old friend of the Erso family, has established there a resistance cell fighting the Empire.

Maybe Jyn is still with him and maybe Saw can deliver his message to the Alliance.

This day he has asked Bodhi to be his messenger. He has told him that he could make it right, if he is brave enough.

Galen was well aware that it is treason to ask an Imperial pilot to desert and contact the so called Rebels.

But he owes nothing to the Empire. He wants the Empire to pay for what it did to him and his family. He wants revenge.

He rise determined from his seat and goes to the hologram chamber. Galen activates the device and begins with the recording. He knows it's the only way to pay for his sins and to get revenge.