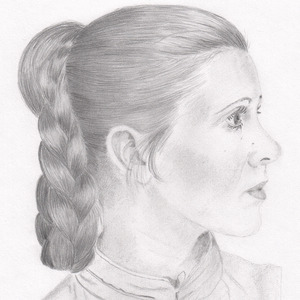 nomidarklighter Rebellions are built on hope.
Autoplay OFF   •   2 years ago
Transcript
The pregnant Leia ponders over her unborn child's destiny.

Leia Organa sits in a chair and looks out of the window. She doesn't like the hustle and bustle of Coruscant. Lost in thoughts she strokes her rounded belly.

The child she carries is in turmoil. She feels him kicking and smiles. Her unborn son is a vivacious boy.

She speaks to her unborn son, whom they will name Ben after Ben Kenobi, with a gentle voice: "Hey, little one don't be so rough." Leia strokes her belly again to calm Ben down.

"You have the temper of your father." She gives a quiet smile and remembers when she met Han first. It wasn't love at first sight on both sides.

But now they are married and she's expecting their first child. A child that according to her brother will be strong in the Force.

Strong like his uncle, his late grandfather Anakin Skywalker and herself. But she has always refused to train as a Jedi when her brother asked.

Now her son will learn the ways of the Force and be one of those rebuilding the Jedi Order.

It seems that Ben doesn't like those thoughts of his mother, because he kicks again. "Ouch, calm down, Ben. Behave like a prince not like a Nerf herder.

" Her expression is overshadowed with grief remembering the annihilation of Alderaan.

Some people still call her Princess Leia Organa, but she's a princess without a planet to rule in the future.

There is no future and her son will be prince of a world which only exists in the memories.

She sighs, stands up and grabs a tiny holoprojector from a shelf. Leia activates the unit tentatively. It contains her most precious property - a hologram of her late adoptive parents.

After decades it still hurts to see the smile of those whom are gone forever. They will never meet their grandson, never cradle Ben in their arms, never sing lullabies for him.

Ben is calm in her belly as if he knows that he shouldn't disturb his mother's grief.

Leia deactivates the holoprojector and put it back on the shelf. Again she settles down in the chair.

She knows very well that her brother projects all his hope for the Jedi Order in the child she carries.

Leia is unsure if her son could fulfill the great expectations, but it seems that it will be his destiny to finish what his uncle has started.