Commaful
After the Fight 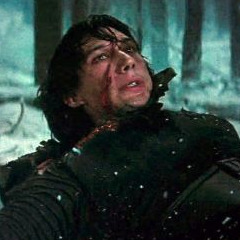 nomidarklighter Rebellions are built on hope.
Autoplay OFF   •   2 years ago
Transcript
It's only a short story about Kylo Ren. Don't expect too much.

Kylo Ren lies in the cold snow of Starkiller Base. His wounds are hurting badly. He puts his hand on his left side, where Chewbacca's bowcaster bolt had hit him.

He remembers the hate he felt from the Wookiee, after he has murdered his own father, Han Solo.

His hand is full of blood. If nobody finds him, he would bleed to death. But somehow it doesn't matter, because the planet was about to collapse.

He wonders, how he had managed to fight against the former stormtrooper FN-2187 and the girl with such a severe wound.

He lifts his hand and examines his right shoulder. Here begins the wound caused through the lightsaber, that should belong to him.

This weapon is his heritage and now it was gone, together with the scavenger girl.

He winces, when he traces the wound. It is really large and deep and ends on his forehead. His formerly handsome facial features were gone. A scar would disfigure them forever.

This scavenger girl was stronger then he has expected. She nearly finished him off. He hates her for what she has done to him. But nevertheless he wishes to train her.

She would be a great asset for the First Order. Supreme Leader Snoke would be pleased if he could turn her to the dark side.

Kylo can't bear the pain any longer and faints. When General Hux finds him he's barely alive. He brings him to his nearby shuttle and heads off the collapsing planet.

Hux hopes that the dark warrior will survive, and Snoke will be pleased with him. He knows that the Supreme Leader is eager to finish Kylo Ren's training.