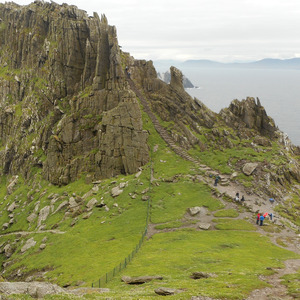 nomidarklighter This is the way.
Autoplay OFF   •   4 years ago
Transcript Use Images
Rey on the way to Luke Skywalker at Ahch-To.

Rey lands the Millennium Falcon on an island at Ahch-To.

She's not sure what she'll find on the island. Will it really be Luke Skywalker? The Jedi Master, she once thought he's only a myth?

She leaves the old dented vessel, which she somehow inherited from the deceased Han Solo. Chewbacca and R2-D2 had accompanied her and stay behind.

She begins the climb over 600 slippery steps. Steps that will lead her to her destiny. What will she find? Rey's pretty unsure, if she's ready for facing Luke Skywalker.

Suddenly she feels it like a homing beacon. Something no someone is there at the summit of the island. She shivers in the cold wind, which constantly blows.

On the half way she passes the remnants of the very first Jedi Temple. Here it all begun. And maybe here it will begin all for her.

When she touches the walls of the buildings, she hears whispering voices. Voices from the past, speaking to her. But she has no time to linger over the voices. She must continue her climb.

She feels the weight of the lightsaber, she's carrying in her satchel. It once belonged to Luke and before then to his father.

She'll give it to him, if it's him on the summit, where she vaguely feels a presence.

Finally she reaches the summit and sees the shape of a man, standing at the edge of the cliff, watching over the troubled sea.

Slowly he turns and slowly he doffs his hood, with a prosthetic hand, unveiling his grayed hair and beard and his weather-beaten face. He's looking with sad eyes at Rey.

It seems as all the misery of the galaxy weighs on his shoulders.

Rey looks at him, searches in her satchel and grabs the lightsaber. She presents the weapon with her extended arm to the man. But nothing happens.

Luke Skywalker doesn't react neither to her nor his old lightsaber. Rey wonders how long it will take, till he'll speak to her.