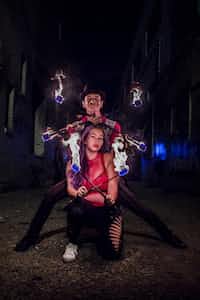 nimh Community member
Autoplay OFF   •   13 days ago
Transcript Use Images
Whimsically absurd internal examination of man and his historically uncanny inability to rise above himself ... Justly setting Woman on her intellectual plateau, having never a finger waved. My poor attempt at a long-winded joke I imagine might cross the lips of professors during scholarly conjecture at an institution such as MIT...
poetry idegofrontal lobeman's folly

I go straight to the basal depths of every stereotyped, typical male cheauvanist's play book...

A dichotomy of self and betrayal of one's very being through reckless abandon,

because of a fleeting moment of complete loss of inhibition...

Is that then truth showing self?

Or instead the living embodiment

of a lie jumping forth

to destroy that peace

and firmly supplant within, Only moments after foul work Completed.. That which we loathe most within our own psyche...

Inhibitions are there for a reason Man..

Frontal lobe be damned, you with your self-righteousness,

A wit and personality so long of this life developed..

Though cold of blood it may not be,

mesencephalon with globus and olfactory bulbs rearing their primitive nuclei...

T'is only that excuse I allowed myself.

Primitive brain yet isn't my blame..

fruitless and in vain, for certainly

Spoken internally into excuse while simultaneous reasoning forbids the same.

whilst Ego's part sets aflame any hopes had

Such is the state we find

of temporary lies self spoke...

Little by little the lunacy subsides

again among the high flying trapeze...

to sooth a mind of its treachery

and acknowledgement of mistake...

Not at all the circus Freak after all..

No, quite common and mundane,

Set this Hubris aside,

in his inferior prime.