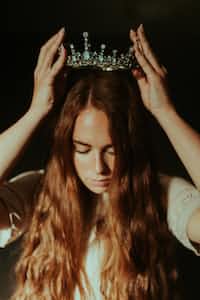 nikithareddy Writing to find out what I think...
Autoplay OFF   •   12 days ago
Transcript Use Images
A sweet story I wrote for the daily prompt
fiction dailypromptpromptministerhopefulqueen

Manu's post-win gloating was new to her. She didn't know he had a competitive edge before. He was good at chess and he almost always won. When he didn't, it meant that he let her win.

She knew that too. He was a FIDE International Master. She was a novice who learnt that chess had something called as opening and closing moves a few days back.

She nodded. She hated losing as much as the next person but his relaxed posture made the defeat worth it. He seemed happier these days too.

Her other consolation was that she was getting better at the game, almost enjoying it. Almost.

"Why do you keep saying 'Minister'? You played officially. Shouldn't you be used to calling it a Queen by now?" she asked, holding up her Queen.

His countenance changed. "Dad didn't like calling that. He would scoff at me whenever I said 'Queen'. " "He said that he would never send his Queen out to the battle field like that." "That he would protect her, the way other pieces protect him."

"Of course, he always made sure that Mom is at hearing distance when he said that. She would smile at times and let it go. Other times, she would chide him and ask him to help her out with the household chores instead," he added.

"Yeah, it is... I liked his explanation too," he said, picking up his own Minister. He looked up and smiled at her.

He was happy. Nostalgic but happy.

His parents passed away recently, within a year of each other. Asking him to teach chess was her way to make him forget his grief. She realized that she had been wrong.

He was getting over his grief by reliving the moments with his parents. The classes, the practice, the travel, the wins, the loses, and the in-betweens. That is okay.

She smiled back. "This is extremely confusing... Both are my kings. I can't protect them both! I declare that the old 'Kings' are the new 'Queens'! I can protect you then."