Commaful
When Will it Stop? 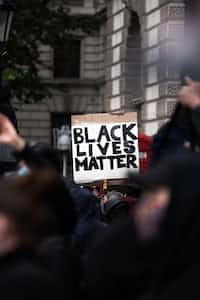 When Will it Stop?

There is to many colored people dying for no reason at all! Many colored men and women have been killed and should not have been.

All the colored people that get killed are usually killed by white people or officers. Some of them do not even get charged or get any consequences for the crimes that they do.

I picked some of the many-colored people to show what we all go through as a nation, and how we are so wrongfully accused of things and how people die everyday for some of the dumbest reasons.

Ahmaud Arbery for example, an innocent black man on a jog. Arbery was not only shot but he was killed by 2 men.

Their names were Gregory and Travis McMichael, a father and son killed Arbery together. They claimed that they thought Arbery looked like a suspect in a series of local break ins.

Arbery was not a suspect and he was unarmed during the shooting. He tried to defend himself (after being confronted) but was still shot anyways.

This shooting happened on February 23rd, 2020, only 2 months ago! He was only 25 the day he died, and his birthday was just in a couple months, 3 to be exact.

Travis and Gregory McMichael were charged with Aggravated Assault and Murder.

This is an example of an innocent black man being killed for something he was not involved and someone that was wrongfully accused. This must stop!

Atatiana Jefferson and Botham Jean, both were killed in the comfort of their own homes. The officers that killed them were white.

Jean was 26 years old the day he was killed which was September 6, 2018, Jean was killed in Texas.

Jean was killed by white officer Amber Guyger because she thought she had entered her home and thought Jean was a burglar, Jean was an unarmed black man.

I wonder maybe if he were white would she have thought he was a burglar and shot him? Amber was charged with murder and manslaughter.

Atatiana Jefferson, was killed October 12th and she was 28 years old. She was at home when she heard noises outside and went to her window to observe and it was the police.

She was shot by Aaron Dean; Aaron was arrested on a murder charge. This is crazy, we cannot even be in our own homes without being killed.

2 more people were killed trying to get help after being in a car crash! Their names were Jonathan Ferrell and Renisha McBride. It is crazy we cannot even ask for help without being killed.

Ferrell was unarmed and just crashed his car, he was not intoxicated in any way, he went to a white person's house and allegedly "banged on the door".

The resident called the police, and 3 officers came.

Ferrell "ran" towards them when 1 officer fired his taser at him and missed, that is when they opened fire and shot Ferrell 12 times, killing him.

The officer that killed Ferrell was Randall Kerrick, he was charged with voluntary manslaughter.

Renisha McBride was 19 years old and died November 2, 2013, she had crashed her car and knocked on someone's door and the homeowner shot McBride with a shotgun.

The homeowner claimed it was accidental and thought that their home was being broken into, they were sentenced 17 to 32 years in prison his charges were 2nd degree murder and manslaughter.

The thing I do not understand is why can we get hurt and try and ask for help without being killed?

Stephon Clark, he was 23 years old when he was killed on March 18, 2018. He was killed by Terrance Mercadal and Jared Robinet. The officers stated they thought he had pointed a gun at them.

The officers fired 20 rounds but shot him 8 times. They only found a cell phone on Clark.

The officers that killed him were not charged with anything and did not go to prison,

the attorney said they had probable cause to stop Clark and they were legally justified in the use of deadly force.

The main message I got from this story is that you can kill innocent black men and wrongfully accuse them.

Jorden Edwards was leaving to get safety on April 29, 2017 when he was murdered. He was only 15 years old. He was shot in the back of the head by white officer Roy Oliver.

He was riding in the front passenger seat of a vehicle driving away from officers that attempted to stop it. He was just leaving a party where he had heard gunshots.

Oliver was found guilty and was sentenced 15 years in prison. At least this officer out of many got consequences for his actions.

1 of them went into the gas station and the other 3 sat in the car waiting with the car running.

They had music playing that was described "very loud" Dunn and his girlfriend had pulled up to the same gas station that they were at.

After his wife went into the store, he asked the 3 in the car to turn the music down. So, one of them complied but then Davis requested that the music be turned back up.

That is when an argument had started between them and Dunn had a weapon on him and started firing at Davis's door hitting him in the legs and lungs and aorta.

They backed up the car to avoid shots when Dunn opened his own door and continued shooting at the car.

All these boys were doing was siting in a car trying to listen to music and chill when one of them was killed.

Aiyana Jones, she died May 10, 2010 and was only 7 years old! To distract occupants, police fired flash grenade into the window of the house.

Joseph weekly, officer, claimed the flash grenade blinded his view of the person on the couch.

When he entered the house that is when the fatal shot was fired, Weekly claimed jones' grandmother attempted to slap the gun from officers weekly and it fired and hit Aiyana Jones.

This little girl was not only killed in her home, but she was killed before she could live out the rest of her life.

Weekley was charged with involuntary manslaughter and reckless endangerment with a gun until both charges were dropped.

Officers were attempting to control Sterling's arms and sterling was shot after reportedly reaching for loaded .38 caliber handgun in his pocket.

Police were responding to report that a man was selling CD'S and that he used a gun to threaten a man. The officer that killed him was not given any consequences.

Officer Darren Wilson said the altercation ensued when Mike attacked Wilson in his police vehicle for control of Wilsons gun until it was fired.

Wilson initiated confrontation by grabbing Mike by the neck through the car window, threatening then shooting him. Wilson shot 12 times but only shot him 6 times and all of them from the from.

No charges were made to Wilson.

For the last person on my list, but not the least, Trayvon Martin. Trayvon had gone to a store down the street from where he was with is father.

He had to walk back home alone,

that is right when an officer named George Zimmerman spotted Trayvon and reported him to police as "suspicious" several minutes later there was altercation between Trayvon and Zimmerman,

during this altercation Trayvon was unarmed and that's when Trayvon was fatally shot in the chest by Zimmerman and he was only 17 years old.

Zimmerman had claimed to be using self-defense, he was charged with second-degree murder and manslaughter.

In conclusion, all these people were either wrongfully accused or murdered just because people think its okay.

All the officers that were included in this were white and all the victims were black. My favorite story out of all of these was the story of Trayvon Martin.

And how he was just an innocent young man, and someone just automatically assumed he was "suspicious" because he was black.

He was killed for no reason at all, all these people's story shows how messed up our world is today, and it needs to change.