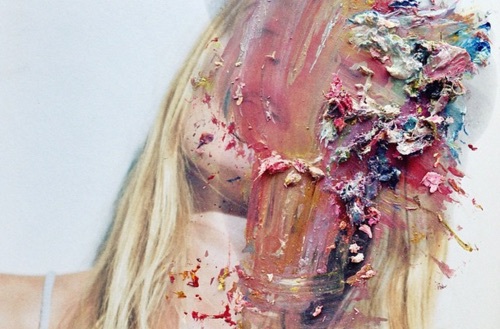 my feet embracing the ground outside; speeding up time. i was shakey and my stomach was in space by the time my friends and i approached the front door with tense laughter consuming us.

the five of us were greeted with love by the host

with her common but inviting nun costume. i must have blinked too long because as i stopped to regain my thoughts; we all were swarmed downstairs in the dim and huddled basement by our peers.

i felt accepted and cared about, that i wasn't just someone they went to school with, that i mattered and i was content

then the games commenced, i was naive;

thinking that nothing noteworthy would occur. as soon as i heard the sentence exit an ill- tempered boy's mouth; my heart stopped; "Lets play spin the bottle"

i glanced quickly at my friend in panic and she revealed

a mirrored image. i had no time to gather my terrified mind as i watched others steal forgotten fairytale firsts from each other.

the bottle was now in my grasp; my nerves numb

i had no more feelings, as i breathed in and spun it like a pointer in a board game. my innocence slowly slipping away at every turn.

at my tall, relaxed, couple of seconds; trying to be free from a drunk bunny girl lying over him. i give one last look to my friend as i desperately try to tell her my feelings with silence.

i leave my juvenile position and crawl towards

his scrawny figure. my hands feel the sense of the straw carpet and the bunny girls fluffy tu-tu; unpretrubed and dazed by the ardent scenario infront of her.

it was meant to be this

an abundance of emotion came flooding in;

our lips departed and so did his affliction; i was unaware

that i was being fooled. not that he was selfish, but my heart was already craving the next chapter when the book was never opened.

however that did not cease my mind from wandering with

hysteria; even after I took a shy delicate boy's heart equipped with his lingering stunning lips.

hours replaying it over and over with laughter and amazement

we girls can no longer keep our eyes open but we refrain from its tempting peace. disbelief and shock are fresh and our faces beam with bliss.

and i just let that statement soak into my skin...