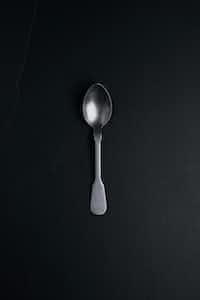 mushroompirahna Community member
Autoplay OFF   •   a month ago
Transcript Use Images
This is a short story about an obsessed man who collects spoons.
fiction horrorfictionshort storyshortstorythrillerspoonshorror fiction

Collecting is the lifeblood of fending off perpetual boredom during the intermissions in our mundane lives. Terry Horan collected spoons.

Terry had collected dozens of spoons; from ornate hand crafted wood to plastic forks from his time working at McDonald's post-college.

Displayed prominently in his kitchen, Terry found it to be the piece de resistance that really tied his empty apartment together.

Terry found that his collection made his life a little less dull, although his everyday struggles seemed to grow by the day.

But whenever he felt sad or bored or lethargic Terry knew a quick trip to the kitchen would brighten his spirits, looking at his spoons for hours and reminiscing about the past.

It started when Terry graduated college. For the entire duration he was in school Terry lived in the dorms, working as an RA his Junior and Senior year.

Despised by many, Terry enjoyed the loud and cramped landscape known only by those fortunate enough to spend hundreds of thousands of dollars for sleepless nights and a twin size bed.

Plus, the abysmal living conditions gave him an excuse to leave his room whenever possible; a requirement to one's sanity when living in a single without any suitemates.

Thus, when his friends moved into an apartment together, Terry stayed behind opting to make a few extra thousand dollars and live rent-free for a few years before graduating.

Having a meal plan for 4 years, Terry was well acquainted with the school's collection of stainless steel, from the spoon that would bend when scooping ice cream to the threek's,

a horrible business venture from the 70's that hadn't yet been replaced by the school's middling cafeteria.

When Terry was packing up his dorm to leave, his four years coming to an end, he found it fitting to find a lone spoon sitting beside his suitcase; beckoning him to take with.

Terry was getting frustrated. It had been five years since college, and he was still working a dead-end job at the McDonalds.

He had just been promoted to manager, a position that didn't encourage him, and instead put him in an even deeper sorrow.

Working 14 hours a day to pay the rent in his shithole apartment just didn't provide enough energy to fund his writing career; a fact painfully described copiously by his Bitch of a girlfriend.

"Is Bitch a shitty thing to call your ex?" Terry thought, grabbing a bottle of Smirnoff from the top shelf of his alcohol cabinet.

He decided he didn't care, draining the vast majority of the fifth in a commendable amount of time.

With happy juice filling up his system, Terry stumbled over to his barstool; and viewed his collection with silent admiration.

Using the skills he learned in his wood crafting elective, Terry had constructed a special cabinet for his spoons, using small j-hooks to keep them upright and visible.

Each spoon was placed in its own small containment, a venture that had maxed Terry's credit card at the Hobby Lobby.

Terry opened a drawer filled with dozens of new unused dish rags and began to slowly and methodically clean the first spoon on the shelf, rubbing the spoon spotless from every conceivable angle.

After maximizing the luster of the spoon, Terry threw away the dish towel and grabbed a new one; continuing this process for the rest of the night.

With booze filling his conscious and having completed his daily cleaning, Terry finally had a clear head. The night was young and all was well with the world.

Stumbling into the road, he decided to find a new addition to his collection.

Terry hated second-hand stores. Firstly, there was the musty smell that lingered in the air, on the merchandise, and on the people shopping.

There's just a general unpleasantness that comes from shopping for items that were tossed out by another human, discarded and thought of as nothing more than trash.

More importantly, however, was the treatment of the silverware, specifically the spoons. Nothing angered Terry more then seeing the horrible treatment of such beautiful works of art.

Picking up a crusty utensil, he saw the faint indentation of a name, inscribed deep below the steel curvature of the spoon.

Terry was filled was rage, seeing the mistreatment of an inscribed spoon; a spoon that was given personality being thrown away like trash. It wouldn't stand.

Terry would correct this atrocity, briskly walking to the checkout carrying a single spoon.

Scanning the utensil, the goodwill employee looked at the spoon and Terry with a face of concern and pity towards the man who had been staring at the silverware aisle for upwards of two hours.

"That'll be all sir," the lady questioned, a lack of understanding obviously apparent in her tone.

"This was quite a hall," Terry responded, her concern flying miles above his head. He was too deep in thought to perceive anything other then his mission.

Arriving at his apartment, Terry proceeded to polish the spoon to a mirror-like shine for the remainder of the night, being awoken from his attentive state by only his alarm,

reminding him of his upcoming shift.

Begrudgingly forcing himself away from his happiness, Terry placed the new addition front and center on the shelf reminding himself that his efforts were only possible with his piddling income.

With that thought driving him, Terry walked to work, excited to spend his night with his new spoon.

Terry knew something was wrong before he saw it. Itching his brain, nauseating every bone in his body, he knew he had to get home.

After faking a family emergency at lunchtime, Terry sprinted home to see an ungodly sight. Police cars surrounded his house, broken glass covering the concrete pavement alongside his windowsill.

Walking numbly up to an officer, Terry knew what had happened before he even asked.

"You the owner of this apartment sir?", the officer questioned firmly, an air of coldness filling his voice and the world around him.

Terry meekly nodded, unable to react with emotion, despair filling his entire being.

"I regret to inform you that there has been a series of break-ins at this apartment complex, you can file a claim to your insurance, although we're working hard to catch the intruder."

Terry walked into his disheveled home, feeling the fear only known by a collector.

TV's were replaceable or recoverable, money was finite, but there was no monetary value in that which has no value.

Walking with concrete feet, Terry walked into the kitchen to confirm his denials. The spoons were completely gone, taken by someone who saw them displayed and thus wrongly assumed their value.

Sitting on the ground, Terry remained for hours waiting for the nightmare to end, his world crumbling around him. What had started out as a hobby had become Terry's everything.

With no friends, no family, and an ex-girlfriend that had gotten married a year before, Terry had consolidated his self-worth and emotions into the one thing that he still cared about.

With nothing left, Terry had nothing left to live for. Terry stood up and began to do something he had put off for months, years even.

Terry walked back into the Goodwill, the same unmotivated cashier at the register. Unlike the previous time he had entered, his current visit was much quicker.

"Keep the change," Terry uttered, walking out of the store and into the night.

Terry was much more motivated then he had been in a long time.

His previous thoughts on the matter had led him to believe that this decision would be long and tentative, but the emptiness inside was driving him more then any career, relationship,

or hobby he ever had. With nothing left, Terry committed himself to finishing it all, stepping into the tub for the last time.

Terry was confused. He could feel himself propped up against a bed but he couldn't move a muscle. Slowly, Terry fluttered his eyes and tried to wiggle his fingers. Nothing.

Next Terry tried to wiggle his toes. Still nothing. Using all of his strength, Terry was able to make a disgruntled gurgling sound come out of his hoarse throat.

Unable to move his neck, Terry tried looking around the room in front of him. Padded white walls surrounded him, with motivational posters plastered all over the drab environment.

"You've been in a coma for a long time young man, it's a miracle you survived! If it hadn't been from a concerned citizen's phone call we might not have even found you at all!

" The nurse explained, with a mixture of concern and relief flooding her face.

"Rest up for a bit, your caretaker will be here shortly." The nurse explained, patting Terry on the knee with a slight smile before exiting the room.

Terry continued attempting to move his limbs, finding that with great effort he could twitch his mouth and face, blink his eyes, and make gurgling sounds.

Despite the hours of attempts, Terry was unsuccessful in any further attempts at moving the rest of his body.

After what seemed like an eternity, a stout elderly woman appeared, carrying a tray of sliced carrots and applesauce.

"My name is Melinda, and I've been assigned to be your caretaker. Don't you worry young man, I'll take good care of you." She smiled, showing her yellowed teeth and curling her chapped lips back.

"I've brought you some food, but don't worry sonny I'll be giving you a helping hand."

Melissa placed the tray on the bedside table beside Terry and with a shaking hand picked up the gray plastic spoon from the tray.

Melissa moved the utensil in front of Terry's horrified eyes and gave him a toothy grin.