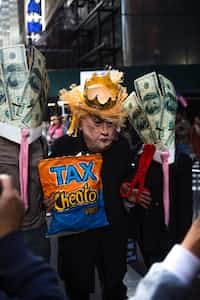 mizuki_haruto σε τρεις ημέρες, το φεγγάρι πεθαίνει
Autoplay OFF   •   5 months ago
Transcript Use Images
This is more a story of someone infamous, but it still counts, right?

I'm on top of the world!

Those of you who want to know what the fuck i'm talking about, I shall inform you.

I've just been elected president! Which makes me supreme! Grovel at my feet!! It wasn't even close! Now, what to do as said president... Well, most importantly, I can't let it get to my head.

I think the first act i'll do as president is cure cancer! Should be easy, right? I mean, I have ultimate power now! I can do whatever I want! I'll also end world hunger, and bring the U.

S debt to 0! I'm honestly surprised that no one else has done what i'm about to do! Their fools! All of the presidents! Nothing but monkey-brained idiots! It's time!

I'm going to give my speech that will solidify my amazing win!

"Hello. My name is Baka, and I will serve as your next president." A great start, I must say! I guess people didn't understand the meaning behind what I say next, however.

"I have a few things I wanted to say first." Here it comes. You wont believe how incredibly intelligent this next part is.

Like I said before, these stupid, impudent humans just don't understand.

" You are all absolute fools! I will give you credit for one, and only one thing! You had enough inelegance to vote for me.

If you didn't, you are indeed incredibly stupid! Every other president before me was a complete embarrassment to how GODLY I am.

I am the most perfect president, and person, that you'll ever meet! Anyone who thinks otherwise is a complete fool.

As for what I plan to accomplish, it will also put every other president to shame!! I plan on curing cancer, ending world hunger, AND paying of every single penny of debt we owe to everyone!

Like I said, every other president is looking up to me as their savior right now!!" And.... That's when they called security. It's a safe assumption that I never became the president.

I'm honestly kinda glad I didn't become president. Well, a little bit. Because at this point, I'm more infamous than famous. So, take that with a grain of salt.