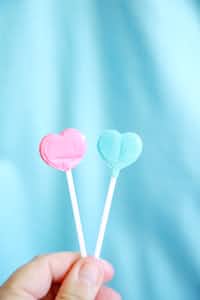 He was addicting like candy. I always had a sweet tooth, so I couldn't take my attention off of him.

I found out in the beginning that he wasn't like candy, but he was still addicting to me.

Way more addicting than I thought. I swallowed every single flavor that he gave me.

Even if it was salty and not sweet because after every flavor that I didn't like I got a sweet flavor as reward again.

It was addicting, extremely addicting and I knew that he was manipulating me but that made it even sweeter. However after a few weeks I started to taste a flavor which wasn't sweet.

It tasted like iron. Warm and thick iron flavor.

I was like candy too. Just that my outer shell was nearly tasteless and sour which hid an extremely sweet flavor inside. It was like pure tasty sugar.

But that was only there to hide the extreme bitter inside.

The problem was that people who reached the sugary shell started to really like me and maybe even got addicted not knowing the bitterness that lied beneath it.

I was sure that he was caught into my sweetness as well, but he built a wall around his core.

A wall that had more holes than he thought because I was able to sneak a few peeks at the core that he tried to protect and cover up so badly.

Seeing how he started to desire my sweet taste I got a bit too greedy too fast. I had no problem with it though because I knew that he was toxic.

The warm and thick iron flavor was toxic, and I was not sure if i wanted to keep swallowing it because it got stronger and stronger each and every day.

I was never a fan of bitter things and was really sensitive to bitter foods or drinks but after the bitter taste disappeared I started to enjoy the sour taste. It was amazing.

Now I only get a warm feeling in my chest when I think about the sweet flavor I got from him but I do not regret it at all because I found someone with a sweet taste again.

His sweet flavor isn't as strong because it's not interrupted by sour or bitter flavors but I'm glad that I found him after a long period of searching.

Until this day I'm not sure if he was desiring my sweet taste or not because his ego was always huge,

and he probably didn't expect me to cut him off immediately (not really immediately but after I explained to him why) after he said he didn't desire anyone for probably the seventh time since I met him.

But I'm still glad that I met him and I would surely be able to talk to him normally without getting annoying and hurtful because that's not how someone should act at my age.