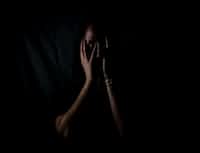 mimidevereauxj Community member
Autoplay OFF   •   13 days ago
Transcript Use Images
There's a Monster at the End of this... Story

Just because you've never seen it doesn't mean it does not exist! Those who've been in it's presence and lived to tell the tale tend to keep their distance.

It does indeed exist, in the truest of forms. I stare at it from the corner of my eye to make sure it remains in it's cage.

It smirks at me like it knows that one day it will be free to roam and terrorize the masses.

I can see the crumbs and empty wrappers at the bottom of the cage from those that feed it despite the "Do Not Feed" sign posted to the cage door. They make it stronger by feeding it.

So strong that one day it might break the cage door open and flee. The last time it was loose a lot of people got hurt, including myself.

Yes, though I know it loves me, it still tore me to shreds. Those scars remind me of it's strength and the possibilities of what it would do to someone it dislikes.

Upon waking every morning, I test the locks on the cage, dreading that day I discover the dead bolt open or broken.

It's laughing now as I write this because it knows that one day my guard will be down, my back turned,

to which then it could escape and devour and eviscerate whomever deigns to step in it's path. It never sleeps, but I need rest to replenish.

It's waiting! Licking it's chops just imaging the destruction to be had once I'm too occupied to wrangle it. It's small in stature but as mighty as the raging sea.

It scratches me as I clean the trash from the bottom of the cage. As I check the wound, it whimpers and draws sad eyes as if to seem docile and remorseful.

I've played this game before and it nearly gutted me then, so no telling what would happen now. It's senses my reluctance to fall for it's trickery and starts to growl and spit at me.

The acidic venom from it's saliva burns it's own skin, but it doesn't feel the pain. The only way to best it is with a mirror.

It's reflection is so jarring that it slinks to the cage's corner and stays there for days on end somehow weakened, defeated even. I was once asked why the mirror and what it sees.

My only answer was that the mirror shows it in it's true form and it sees what it fears the most; it's opposite, it's opponent, it's reason for being.

Later on that night out of curiosity I stood next to the cage with mirror in hand and took a glanced into what till this day is the most terrifying sight I've seen in my entire life.

In the mirror the demon was free and I was the one that was caged. We stand next to each other looking into a mirror and I then realize what the demon knew all along.

To rid itself of me would be killing itself. That's why it let me cage it, better than death I suppose. That's why it never hurt me as bad as the others, because it would only be hurting itself.

As understanding dawns, my thoughts turn to the perfect way to co-exist. You see, we all have our demons.

Controlling them or keeping them caged doesn't necessarily rid us of them, it just makes it easier for them to attack us.

It also makes it easier for others to feed it and make it stronger to fight for freedom. The key to co-existence in finding a balance and a respect for each others existence.

It was created for a reason, to protect and defend its host and should not be feared. We walk hand in hand now, no need for mirrors or cages.

I give it allowances for the things I can't handle and in turn it doesn't terrorize me or others for fear that it will be destroyed. Ever my constant companion and friend!