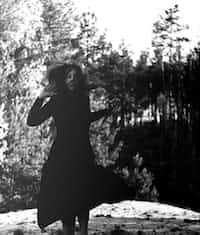 A matter of pride! A matter of Ego! But pride and ego can keep one away for a certain amount of time. It's like a relationship with food.

You can deny it with all the certainty in the world once your stomach is full. Then, you feel hungry again. You can bare it for a while. Then you feel more hungry.

It is starting to get frustrating. And then you starve. The sense of starvation can drive mad. You cannot stop thinking about two things.

The pain of your hunger and the images of the one thing that can stop this pain.

And love is like hunger! Or should I say lust; You can easily love anyone and be away from them with no frustration. You are happy you know they are well and that's more than enough.

The problem is when you feel lust. When you are hungry for someone. When you yurn to kiss them, and touch them, and lick them, and taste them, and merge your whole being with them.

And for a reason you can not understand that specific hunger can not be satisfied with anyone else. Na matter how hard you try.

But that's the funny or strange thing about addictions in human relationships.

When you remove yourself from the life of the other, for the reasons you do,

Her intelligence is not a matter of iq, it is more like she is diving deep into his soul, bringing to the surface feelings he never knew he had,

she is the bright light showing every little aspect of everything he tried to hide, he feels paralyzed up on her gaze, he is scared the shit out of her harsh truth,

he feels weak and powerless next to her.

She is independent, and strong and uncompromising and she doesn't need him and at same time he is complimenting her he feels envy and anger and he wants to travel back to the Neattardal age,

be the man, be the boss, drag her by the hair back into his man cave. But he knows that's a midsummers dream. He' ll never be the boss. She is the boss.

He knew the moment he kneeled in front of her for the first time, and she run her fingers through his hair,

she was his queen and he was a knight offering her his life and allegiance and she could have as easily had him beheaded and that would be fine with him.

Not one man is often given this opportunity. He hated her and he left her.

One day she might decide he is not good enough and then she would leave him. So, he left first. He left and was so self assured he made the right choice.

And then time went by, he got hungry, then he starved, and that drove him mad. He deprived him self from what he did not know he was addicted to. Addictions get revealed this way you see.

Because when it comes to the body connection as well as the mind connection it is a matter of knowledge.

Not realizing his mind and soul were still with her. Human connections are dangerously painfull when people don't pretend. It is raw ! Raw words ! Raw feelings ! Raw pain.

Raw pain when he remembers the last time he made love to her. The white sheets. Her taste, her smell, her sounds.

Men returning are merely addicted to that one specific woman. What they seek is their truth. They have a first glance, a small taste of this unusual human being, get scared and walk away.

Then they feel the burden of the unfinished challenge. Like a dark cave they never got the courage to walk in.

They step up, they man up, they level up, gather knowledge and strength and come back, ready to solve the riddle.

Men return when there is still undiscovered territory and a battle they have yet not conquered.

People are always more tempted to desert the ones they know are going to make it perfectly well without them.

One said it was the best sex he ever had. That's the way it was interpreted by his level of perception.

He never saw all the little holes she made on his shell, leaving space for his asphyxiating soul. Another one said he loved her wisdom. He talked to her once.

Once you cought her, she never left your system. He said she was delicate. He said just give me the green light and I ll travel the world to be with you. He said it is you!