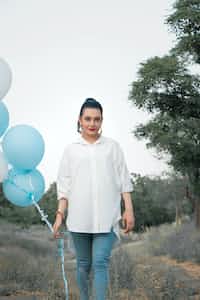 She met him in her apartment.

She asked her friends about why he is here ?

They told "he shifted his home to this apartment"

He make friends in the apartment , some of his friends also her friends So she heared about his characters from her friends.

He his nice guy, and perfect gentle man, respect everyone

After hearing these , her mind confirms that he is my man. But her brain tolds " no no you should not love him, it's wrong thought"

She's is confused. She didn't tell to any of friends about this thought, she kept it herself

One day that boy came came to her house , she shocked and nervous But he came to meet his mom,.

Her mom is music teacher, he interested to learn paino , so he came. She knows paino well, her mom told to teach him the basics , since she is busy.

So, both of them started talking to each other, and they became friends. Her mind always fall for him, her mind not allowed to tell.

One day , both of their friends are talking to him,

They told : why did you dislike marriage? She : shocked He : I am not interested in marriage, and commitment , I want to be independent.

She breaks after hearing this .. Will his mind change ?