Commaful
The Woods 9: The Woods – Kevin Escapes the Tree 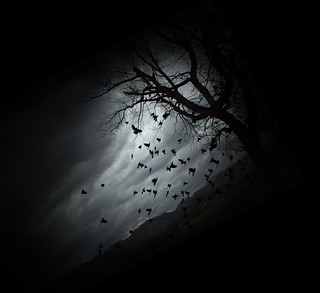 The Woods 9: The Woods – Kevin Escapes the Tree

Kevin wriggles in the dirt and leaves, squirming and struggling to pull himself free of the fallen tree imprisoning him, feeling like it is trying to press down, to push him down and bury him in the dirt beneath it.

Sobbing openly despite the possible repercussions it would normally lead to, the incessant torment and teasing from his brother, Jesse keeps frantically pawing and scratching at the frozen soil.

It’s softer here because the rotting deadfall has been a successful catch for falling leaves, the loose detritus wasting in a soggy mush. The warming early spring days have softened up the melting ice, loosening the rotting leaves once he manages to break the thinning ice.

He stops and grabs Kevin, pulling on him. He repositions, bracing his feet against the tree to pull harder. His feet feel like they will sink in, the wood softened with rot and giving somewhat in to the pressure.

Kevin inches out, and again with Jesse’s next tug.

They look at each other. They have hope. They renew their efforts, Kevin squirming and wriggling and Jesse pulling with all his might, inch by inch until Kevin is finally free.

Exhausted, they both fall on each other, laughing out the fear and stress and relief.

They hug each other as brothers will after a moment of extreme stress.

“I thought I lost you there,” Jesse says.

Kevin struggles to get up and Jesse helps him. It feels strange to him, the younger brother helping his older brother up when not so many years ago it would be the other way around.

They fight a lot, as siblings will. But Kevin is generally there for him, looking after him.

“Are you ready to try it again?”

Jesse pauses. Every time they try to leave the yard, they are back here in the woods.

He nods. Even as his head makes that bobbing movement, he feels as if his body is swimming, swimming through mush, reeling, floating, rushing at breakneck speed through time and space, all at once.

Kevin climbs over the tree, stepping high yet again over the snow and naked brambles and twigs of the woods, heading for their back yard. Jesse follows.

They reach the yard. The snow is littered with their broken footsteps from their earlier time spent playing in the yard. The half-buried bike poking up from the snow like a skeletal corpse.

Conspicuously absent are their earlier footsteps from their previous trips back to the house or their attempts to leave the woods.

It is just as they expected it.

“This way.” Kevin leads the way, this time following the edge of the backyard to the neighbour’s yard.

They make it to the back edge of the house.

Kevin looks back, nodding. So far, so good.

Jesse speeds up to move closer to Kevin.

They pass the back corner of the house, heading up the side yard.

They pass the first bedroom window.

Kevin feels the urge to break into a run. He holds back.

Jesse reaches for his hand and Kevin takes it.

The second and last window on that side.

They both laugh, full of relief, and start sprinting for their goal, the house next door and freedom.