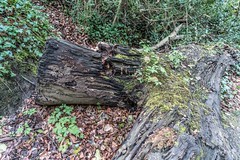 “What is that?” Jesse looks around, alarmed.

Kevin is busy inspecting the object in his hand.

It is rounded with the mud and rotting leaves stuck to it. He can’t tell what it is.

“I don’t think so.” Jesse can’t stop looking around. He feels off. Something is wrong.

Kevin looks at him. “You are a goof.”

He looks around them. Jesse is right. His heart beats faster and his chest feels tight.

Everything looks a little off. The color. The light. But it’s more than that.

Something he doesn’t know how to describe. It’s just … off.

Slowly, he bends down and puts the unknown object back down, wanting to free his hands.

He stands up and looks around again.

“Now he’s got my mind playing tricks,” he thinks.

There is nothing strange at all about anything.

“It’s nothing,” Kevin says. “You really are a goof.

I don’t know what you’re talking about. Everything is normal to me.”

He turns his attention back to the strange item at the base of the stump.

Jesse backs away, moving back towards their yard.

Kevin bends over and picks it up. He stands up and looks around. He feels off.

Jesse is moving away and Kevin doesn’t want to admit

he’s afraid to be alone in the woods. He pockets his treasure and chases after Jesse.

They reach the yard and stop. They both look around. It all looks a bit … odd.

The color is off just a bit. It all feels a bit odd. Out of sync maybe.

The house is not large,

a lower middle-income home, all but the windowsills and doors were repainted last year.

The paint of the windowsills is cracking

and starting to peel. A job their father has not yet gotten to.

The lawn, mowed only three days prior,

is only just starting to show the sprout of faster growing grass blades reaching over the others,

although the dandelions have already popped their heads up,

flashing their yellow flowers to the sky like round smiles.

A bicycle lays discarded on the lawn and

a swing set stands on one side of the yard waiting to be used.

It all seems a bit dulled, muted, a bit off color.

Like a television set that someone has buggered with the color settings on.

He falters, not watching and almost tripping on

the bike laying discarded on the grass. Recovering, he keeps going.