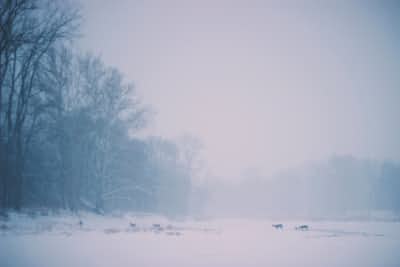 Author of dark fiction
Autoplay OFF   •   5 years ago
Transcript Use Images
Snow is a surreal story. It is dark and twisted. It explores the churning feeling we call fear, while embracing our disassociation with so much that is so near.
thriller fearlvgaudetsnowsolitudeauthordeathhorror scariest author storiesscariest fear storiesmost romantic author storiesscariest lvgaudet stories

It was a dark and stormy night. No, actually it wasn’t. That is just so cliché.

It was neither dark, nor stormy.

In fact, it was quite bright and tranquil

with the snow lazily falling and blanketing the world in a soft downy blanket.

However, there was a dark storm brewing somewhere, deep within the breast of one

fateful soul who will have a rather fate-less affect on those around.

Not so much in a way of lacking chance and destiny,

being one that is lacking in fortune and future.

It would be a fate resulting in no fate, no future, and ending in a finality of fatality.

To everyone else it was a day as any other day.

It was the weekend, Saturday to be precise; and only days before Christmas.

as it seemed to be carried on the wings of the very snowflakes themselves as they drifted down,

The distant soprano rumble of sleds bounding across the fields is felt more than it is heard.

muffled hush brought on the world by the gentle snowflakes. Somewhere a dog barked.

A scream bounced from snowflake to snowflake.

It didn’t sound right. It wasn’t the fun filled happy shriek of a tobogganing child.

It was shrill and desperate, torn violently from the throat, frantic and terrible.

The scream didn’t register though, so lost was everyone in their own activities,

in their own private little bubbles of their own little worlds within this winter wonderland,

separate from all the other little bubbles, bouncing about each other

The dogs heard it. All around the little town dogs barked and howled.

It could be some time before someone learns

the terrible truth behind the scream that everyone heard, yet no one noticed.

Perhaps the next snow fall. ###

The air tasted crisp, so intense was the cold,

biting at fingers and toes within their protected confines,

making noses sting and lungs burn with each inhalation of chill air.

It was too cold even for Jack Frost to be out

performing his public service of decorating window panes with his intricate artwork.

The cool light of the moon seemed colder, more distant,

shining with an ethereal pale light wrapped in ghostly light

circles as its light refracted off the invisible frozen air crystals

hanging suspended in the atmosphere enveloping the earth.

The stars tried feebly to point their little beacon lights to the ground below,

The clouds rolled in, shrouding the ground below, hiding it from the moon’s view,

shutting off its pale light. The snow started to fall.

multiplying in number, and turning into a dreamy soft down gently touching every surface.

This time there was no scream bouncing off the gently falling snow, just a wet sort of gurgle,

A stray dog snuffled about in the snow.

The dog walked as if on a mission, purposeful,

intent, tail and body tense, sniffing and snuffling at the snow as it went.

Deep tracks followed the dog through the thick blanket of snow.

The dog startled with a yip, turned tail and ran away, its trail following like a shadow.

The snow in the hole dug by the dog’s questing nose was stained crimson.

each doing their own thing and oblivious to the lives around.

Without a sound one of these little bubbles popped.

The woman walked with some difficulty

through the snow along the edge of the trees where the snow was less deep.

She looked about her keenly,

every now and then cupping her hands to each side of her mouth and calling.

She was looking for the family dog

that had escaped off the rope tethering the animal safely in the yard.

and across the field. Just beyond it lay another track,

less defined as though made by less careful movements.

The track led into the trees

She thought for a moment and decided to follow the next track into the woods.

She didn’t get far before she found the dog. Well, what was left of the dog anyway.

Her heart thudded hard and fast in her chest,

her breath caught as her chest constricted, eyes widening in horror.

Something slammed into the woman,

knocking her sideways a few feet and down into the white downy snow.

A crimson stain slowly began to spread across the pristine snow.