Commaful
But What if Icarus is In Love With the Sun? (Pt2) 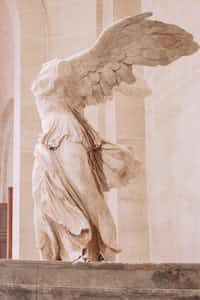 But What if Icarus is In Love With the Sun? (Pt2)

They talked for the rest of the daylight hours, and when the sun rose they talked all day again.

Despite the fact that Icarus couldn't quite believe Alina, it was so easy to talk to her that she didn't really care. Besides she could be right, after all why would a goddess lie to a mortal.

They became fast friends surprisingly enough, understanding each other better than either of them would have assumed. Months passed quickly, feeling merely like days.

Icarus spent most of her moments awake even in the dead of night. From dawn to sunset Icarus talked to Alina.

To anyone else it would appear odd, a girl talking out the window to the sky, but there was no one else around, yet for once in her life Icarus wasn't alone.

Her nights however were not as pleasant as the daylight hours spent with Alina.

Throughout the night she worked on a pair of spectacular wings, modelled after the wings of the birds that would pass by her window.

She collected feathers from the beach shore and ones that blew into the tower. She'd even torn up several of the feather pillows.

Then she'd sit on the floor with a candle pouring the wax onto the feathers and sticking them together. Icarus only got 1 or 2 hours of sleep each night, if that.

It was approaching faster, the day her Uncle was supposed to return, only a month away, and it was like Icarus could feel the chill building in the air on the November day.

She wanted more time, for what she wasn't sure. She felt homesick for a home she'd never known, never had.

If everything Alina said was true it changed her entire life, Icarus still could barely believe what Alina had said yet deep down she knew it made sense.

Still she spent her whole life this way, trapped in a tower. And being in some fancy palace to know her father for a month or so, til he died, and then being forced to take the throne.

How would that be anymore a home then a tower she was kept captive in. "And what about Alina," she couldn't help but think. Of course it was ridiculous, Alina was a goddess. Icarus was just...

Icarus. Alina wouldn't care if she was gone.

"Sorry, I- I was just thinking," Icarus replied weary.

"Umm, it's nothing really,"

"It would be too risky," Alina replies, her voice sounding colder than before.

"You need to find a way home, Icarus. I don't think you realize that it would break me if you died and of course it'd be hard to not talk to you but at least I'd know you were all right.

"How could the death of a mortal break a goddess?"

"You're not just a mortal, you're Icarus."

That was the day when Icarus realized you can be homesick for a person as much as you can for a place.

It was also the day she decided that even if Alina was wrong about Minos she was leaving the tower.

Supposedly mortals can't ever reach gods but no one had ever tried and from what Alina said it wasn't that impossible.

It was really like there was a thin veil between the mortal world and the gods.

Icarus believed there was nothing stopping someone from breaking through and if there was even a chance she was right she was going to take it.

November faded to December and Icarus' plan developed quickly. Each night she was getting closer and closer to finishing the wings.

And each day she was reminded why she wanted to leave so badly, what it was for.

"Icarus?" Alina called that December day. There was fear in her voice.

"What's wrong Alina?" Icarus replied, hiding the fear from her own voice.

"Minos will be here soon, he is supposed to return in less than a week. He's going to kill you Icarus, and yet you sit here so calm. I don't want you to die."

"If my Uncle really does plan to kill me, I have a plan. I won't die."

"Trust me," Icarus says, cutting her off.

"I have to go," Alina says, sounding as though she wished she could stay and watch over Icarus forever, but it was nearly sunset.

With the setting of the sun Icarus went back to work, after months the wings were nearly finished. A few hours passed and it was that time of night that should be dead silent, but it wasn't.

The water had been still all day, as if the moon had given up on caring about the oceans, yet gentle waves crashed on the shore of the beach.

Icarus went to the window and at first it was too dark to see but out of the shadows came a ship, unmistakably her Uncle's. "It's four days too early," Icarus said aloud to no one in particular.

She watched as the ship grew closer and closer mesmerised. Then the ship docked and she snapped back to reality. Of course Alina had been right.

What other reason would he arrive four days early and in the dead of night. He was undoubtedly here to kill her, but the wings weren't quite finished.

Icarus ran from the window to the door locking it then moving a chair under the handle in case he had a key.

The ship was docked but she couldn't tell how long it had been on the shore.

It was nearly dawn now. She heard footsteps coming up the stairs. The wings were done but not dry so she stood waiting. The footsteps stopped and the door knob moved but didn't open.

"Icarus open the door," Minos calls. "ICARUS," he calls louder. She doesn't respond. It's silent for a moment then the door thuds and Icarus jumps a little. It thuds again, and again.

Icarus knows it'll break sooner or later. The wings aren't completely dry but they'll have to do. She had no choice now anyways. Icarus pulls on the wings and climbs on the window sill.

She looks down at the dark water beneath and the sparkling sunlight starting to hit the surface. Suddenly the door breaks down and Icarus almost falls out the window.

Minos stands gapping at her. "Icarus-" he starts. "Goodbye Minos."

Icarus stands then leans back. She's falling at first a little faster than she expected, but then she's flying, soaring through the air. She was free, truly free for the first time in her life.

The world was hers. She's down low by the water, running her hand through it like they do in books and movies. Mist from the water sprays her face, washing away tears.

Icarus wasn't sure whether they were tears of sadness or joy.

Then the realization hit that she wasn't safe yet, she was too close to the tower, to the ship, to her uncle, to the past she didn't know, to the future she would never choose.

It was near mid-day when she realized that there was nothing to be seen anywhere, she really was free.

"You're very quiet today," Icarus calls out her voice sounding unsteady to anyone who would have known her well.

After a while Alina replies, "Why didn't you tell me?"

"Cause if I did I would have told you everything."

"Once I start talking to you I can't stop. If I had told you about the wings I would have told you my whole plan and then you would have insisted that I go to my father instead."

"That's not what you're doing?"

"No," Icarus says, unable to keep from smiling as she slowly rises higher.

"Icarus the wings, what are they made of?"

Icarus was near the height of the sky, Alina just in reach, but the wings were already starting to falter.

"Come on, come on, just a little bit further," Icarus thought, terrified though it can't be seen on her face. She's nearly there and she reaches her hand out...

To touch the sun. It doesn't burn or hurt. It's like sitting by a fireplace or holding a warm drink in between your cold hands.

It's like that feeling when the sun seeps through your skin deep into your bones. It's a safe comforting kind of feeling that no one else would ever get to experience. No one but Icarus.

For a moment she was there, Icarus was with Alina. Their fingertips brush but it was all happening too fast and Icraus could feel the warmth slipping through her fingers.

Gravity was pulling on her now, the wings were useless. "I love you," Icarus says with a smile that had become all too familiar to Alina.

It all happened too fast and Icarus is plummeting to the Earth looking like a falling angel.

It's all happening too fast but to them it feels like slow motion until Icarus hits the water and the waves swallow her whole.