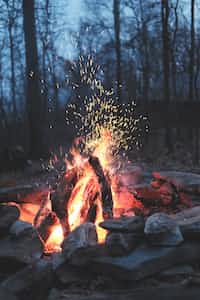 lorenzobonoan Community member
Autoplay OFF   •   a year ago
Transcript Use Images
A typical summer camping trip with friends turned into a life changing event that will haunt them forever.
thriller horrordemonsscarycampingsummer1989

It was the summer of 1989, we just graduated high school, all of our parents were out of town, so my friends and I decided to go out in the wilderness together with our girlfriends.

My buddy, Doug owned this camp site near a lake. It was owned by their family for generations. What we didn't know, that this would change our lives.

We decided to leave for the place at 5am, as to avoid the rush from the city, it was probably Monday morning so it was hard to get up.

I was assigned as the driver for the trip since I was the one with the biggest van. Doug and Mary went ahead to have the site prepared.

My girl was on navigation duty, while Jenny and Zeke were on food duty. The camp was about a 5 hour drive from the city outskirts.

We arrived at about 10, the place was huge, it was like two baseball stadiums put together.

I wasn't really a fan of the great outdoors, but a quick getaway from the city is very much appreciated. We all disembarked shortly thereafter, had our tents pitched, just in time for lunch.

Night came along and it was probably the best night I had with my friends. We were all just living in the moment, it was the most fun I had in while.

It was then time for us to hit the sack, when we heard a strange guttural scream from beneath the trees.

It wasn't the sound of a bear we heard, it was something different, unfamiliar to any of us.

I asked Doug of the history of the place, he never actually learned its history so we were all terrified of the sound that we heard.

As a way to calm ourselves down we decided to wander around the site. A decision we later regretted.

The darkness enveloped the entire area despite the size I mentioned earlier.

Trees as tall as buildings surrounded every nook and cranny, it was hard to see when there were only two flashlights available and to make matters there all phone reception was dead.

After an hour of wandering, upon the corner of my eye, I saw this strange glow, it looked like a pair of eyes staring at us, then just disappeared in a split second.

I just brushed it off and thought they were fireflies.

When we reached one of the farther points of the camp, what we saw was beyond what we could have thought of.

Strange claw marks, etched with the words "Damnation is near!" Seeing these words, we rushed ourselves back to our tents. When suddenly a strange figure was standing in our way.

This strange figure was about seven feet tall with piercing yellow eyes, sharp fangs, black talons, and horns that were three feet long.

There was no way of getting past the towering beast ahead of us.

Hiding was also not option, running away from it was the hardest task, looking directly at its gaze would petrify every single nerve in your body.

Luckily, bright lights blinded the creature, Doug tried pointing the flashlight directly at his eyes, and it worked. We all made a break for it, and ran to the van as fast as we could.

Unfortunately for Zeke, the creature caught up to him and slowly devoured him.

As we left the site, I floored the accelerator just to get out of that place as fast as we could. We will definitely remember that night, and this will haunt us for the rest of our lives.

Although one thing is for sure, that will be the first and last we set foot in that place.