Commaful
The return of Lee...(Part 1) 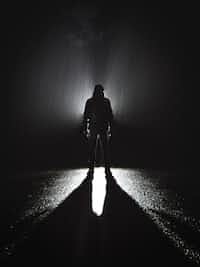 It started off as a nice morning or so they thought.... You may remember two kids, David and Isabel, who were on their way to the old forest to place more flowers on the grave of their friend Lee who sacrificed his life to save them.

Here is a quick recap of what happened before this story... In the last story 3 kids named David, Isabel and Lee entered into a strange forest to explore and take pictures. That is until however they were shocked to find out that it was full of monsters and anyone still in the forest for at least 24 hrs was trapped in it forever...

Sadly Lee pushed David and Isabel out of the forest exit just as the invisible wall formed trapping lee on the other side just as the monsters killed him.. Years later the national guard set up a perimeter around the forest that nobody could pass .

Now David and Isabel are currently on their way to visit Lee's grave. David: "Man I can't believe it's already been 5 years since Lee died" Isabel: "Me too but I'm sure he's in a better place now instead of that forest..."

They were almost to the military checkpoint where they would be allowed in once the passes were seen. They were the only ones allowed to enter it other than the FBI for testing and they had a new system a safer one.

Every time someone entered the forest the guards would set a timer for 24 hrs to keep track of time and the people going in would be escorted by 4 armed guards in case one of the many monsters in the forest appeared.

Isabel: It's sad to think about Lee it felt so weird graduating without him... David: I know he would have been so happy....I just wish I didn't treat him badly before...I can't stop thinking about it Isabel: David, it's okay remember lee forgave you before it happened, I'm sure he would be proud of us right now, especially with how far we have gotten.

"David smiles back and they hold hands as they keep walking to the checkpoint" Over the last 5 years, David and Isabel got way closer after losing Lee. They felt as if it didn't feel right to be apart.

"They soon made it to the checkpoint and the sheriff waved over to them" Sheriff: Ah look who it is!, David and Isabel wow it's been awhile sense I saw you guys I see you are together now congrats.

David: Thank you, it's a work in progress haha Isabel: Yeah we plan on going to the movies after we visit lee's grave (Isabel smiles) (The sheriff looks around and whispers to both of them) "Look kids, I hate to say this but you guys shouldn't visit today trust me please leave now"

A scientist will be visiting today and well....let's say he doesn't seem straight something isn't right about him and-

"Before he could finish some armed guards came with the scientist" Scientist: Ahem Sheriff I will be taking the kids into the forest now Sheriff: Well maybe I'll come along ya know haha (He laughs nervously) Scientist: "No" stay here and protect the gate

The timer was set for 24 hours and the 4 armed guards followed them into the woods where the tombstone of Lee was.... But something was changing and nobody realized a thing until it was too late

As they were walking through the forest nobody realized that the sun seemed to be setting quicker than usual..... Until David and Isabel later noticed that the sun was setting when it was only 5 in the afternoon

But they didn't care, they just wanted to get to their friend's grave.... David: Were almost there Isabel: Hey uh david have you noticed how those armed guards and the scientist took a different path back there it's....strange

David: Hmm maybe it's just the effects of the forest I mean it was dark the first time we came here Isabel: Well that's because we camped at night david.... David: I was going to call out to the guards but their just gone? I swear we saw them go down this path a few seconds ago??

"They soon made it to where Lee's grave was. David and Isabel smiled as they placed the flowers down on his grave" Until they heard movement coming towards the area so David quickly grabbed Isabel and pulled her towards some trees to hide behind

Isabel: Hey it's that scientist and the guards David: sigh....I knew I had a bad feeling about this Isabel: Hey you sound just like Lee haha right....Lee....oh yeah (Isabel looks down) David: It's okay but what are they doing?

The scientist pulled out a old book and shoved the flowers off of it then stomped on them while laughing and placed the book. He then started to read from it as the guards stood watch "David became enraged by that and ran out towards the scientist " Isabel: DAVID NO!

"The scientist quickly pulled out a pistol and shot him in the leg, David screamed out in pain as the guards surrounded him. " Scientist: I WILL NOT LET YOU RUIN THIS FOR ME! Isabel: STOP! WHAT ARE YOU DOING! Scientist: you stupid kids should have left hours ago!

But if you really want to know, I experimented with rituals and I found the perfect way to bring people alive from the dead and knowing your little friend died in this magical forest it was the perfect place for my work! Now get your friend to stop shouting and watch as I bring your other friend from the dead in a new form......a better one (The scientist laughs)

As the ritual is complete fog fills the air and they all stare in shock to see that it had worked.... Lee was standing there but he seemed....different

His eyes were glowing white and he looked angry at them David: Lee! it's me! Lee: .... Isabel: Why isn't he speaking?

Lee looked at them then spoke Lee: Guys Leave! I can't....control.....YOU WILL DIE! Lee quickly started running at David who was still on the ground from the gunshot with a bloody knife

Isabel grabbed Lee's arm and started holding him back from stabbing David Isabel: LEE STOP IT'S US! Lee pushed Isabel to the ground and lifted the knife and just as he was about to stab David they all heard a gun shot...

It was the sheriff, he arrived in his car and quickly got out and shot Lee Sheriff: I'm sorry but I had to save you kids, he was gonna kill you

Lee: I'm.....sorry Lee fell over and then disappeared in a cloud of smoke Isabel was speechless Sheriff: Come on kids let's get out of here.....it's been a long day