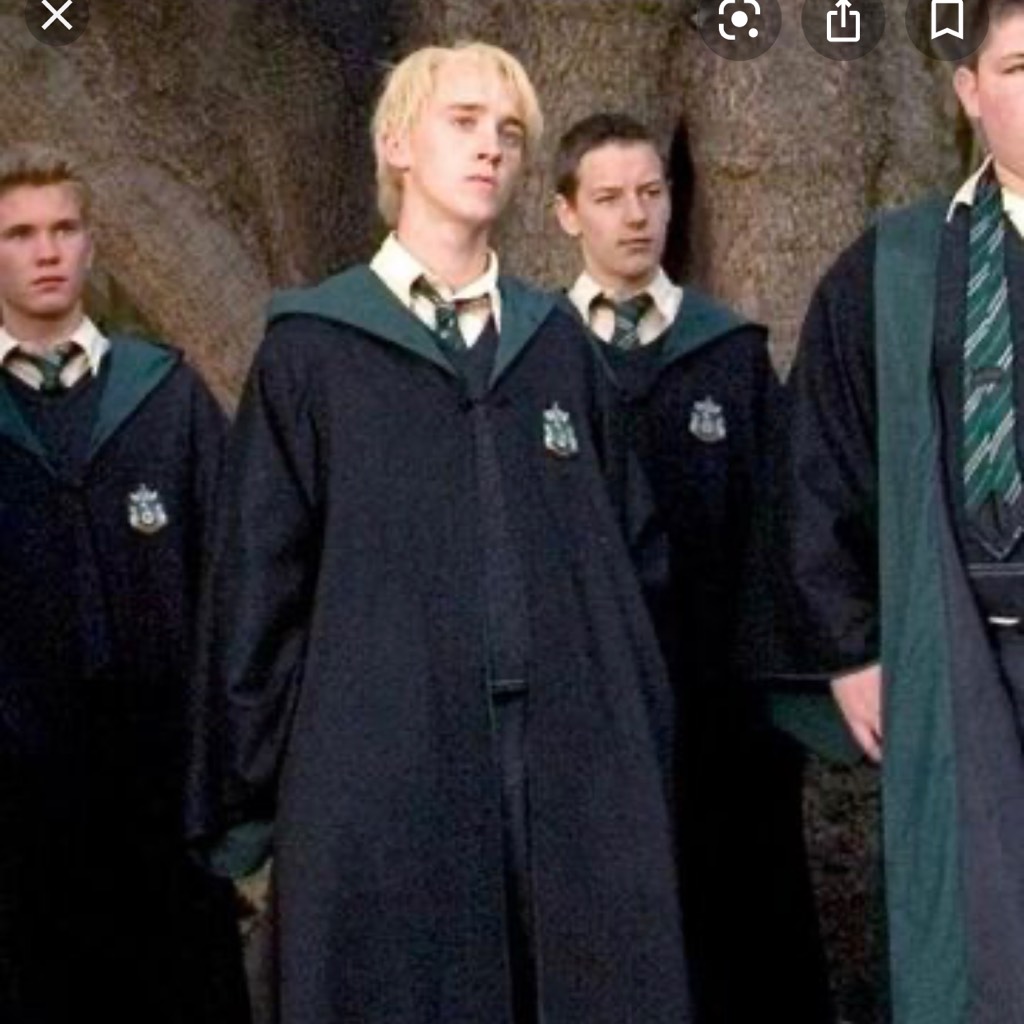 lochness8 I post avenger fanfics and HP fanfics
Autoplay OFF   •   a year ago
Transcript Use Images
Meetings with Draco and an investigation. This chapter is dedicated to @denicav! Enjoy!
fanfiction harry potter-draco-hogwarts-wizards

The library is practically empty besides two other people. I find an empty table near the corner away from peoples eyes who could potentially start rumors. I seat myself in an empty chair and find a newspaper on the table.

It’s a Daily Prophet. It reads: Siris Black Sightings Around London. “Great.” I mumble to myself. All the places listed are near Hogsmade. Draco strides in and seats himself next to me. I get a big wiff of his strong expensive cologne.

“You’re scaring girls away rather than attracting them with that stench.” I remark with snide. “Oh Little Amora I thought we’re supposed to get along?” Draco mocks with a pouty lip.

“Shut up, I can only tolerate Fred and George calling me that.” I remark. Draco rolls his eyes and puts the assignment between us. I try to squint and read it.

I actually have glasses, for reading and I normally only used them when I’m by myself bc I’ve been told I look rather dorky with them.

I would never pull them out with Draco here, he would laugh to the death. I pull the paper closer to me, which results in Draco leaning over my shoulder, invading my personal space. I can feel his hot breath on my neck. His minty breath fills my senses.

The potion is called. Veritaserum, truth potion. “That’s a very powerful truth potion.” Draco says. I nod. I look at the long list of ingredients.

“That’s a long list.” I mumble. “Yeah. Let’s just start with the report, since we don’t have the proper location to start the potion.” Draco suggests.

I pull out a piece of parchment and my black quill and ink. Draco pulls out his materials. I date the title: Veritaserum Report. “What is the significance of this potion?” Draco reads the question aloud.

“Um. The significance of the Veritaserum is to unlock the truth of the consumer.” I answer. Draco and I start writing down what I said. The next thirty minutes were not as unbearable as I thought they’d be.

*Half An Hour Later* And that’s the last of it.” Draco says as he packs away his things. “Erm yes.” I respond, I sling my bag around my shoulder. I start striding down the halls to Defense Against The Dark Arts. I walk down the grey corridors and suddenly bump into Ron.

“Oi Watch it! Oh wait? Amora?” Ron asks turning around. “Hey.” I reply. He exchanges a look with Harry and Hermonie. “Where’ve you been?” He asks dumbfounded.

“I was in the library with Draco. We had to work on our long term report for Potions.” I respond. “How was it?” Harry asked through clenched jaw.

“It was okay. We agreed to be nice and I didn’t hate him as much as I wanted to.” I reply broodingly. Hermonie sighs. “How’s your partner?” I ask her. “Ronald.” She mutters. “The feelings mutual.” Ron jokes.

Hermonie nudges him in the gut. “What about you Harry?” I ask. “Pansy Parkinson.” He mutters dully. “Draco’s girlfriend.” Ron snarks.

“Maybe she’ll fall for Harry and make a whole scene.” Someone says. I turn around and see Fred and George.

“If you ever want to get back at him. Don’t hesitate to come to George and I to get pay back. We have a massive supply of nausea nuggets.” Fred whispers. “I’ll let you know.” I say. “Got it.” Fred winks.

“Off to class then. We have defense against the dark arts.” Hermonie says excitedly. “Your father is a great professor Amora!” Fred calls.

Thank you!” I call back. He smiles his crooked toothy smile and walks off to his class with George. I follow Harry, Ron and Hermonie to DATDA. We walk in and I find Draco with his “followers”.

Harry, Ron and..where was Hermonie she was just here? (Where do you think Hermonie is/went? Comment your thoughts winner gets the chapter dedicated to them.)

“Ron where’s Hermonie?” I ask. Ron is cut off by Draco. “Maybe this year we will learn some actual spells!” Draco yells. I start walking towards Draco but Harry pulls my arm. “I’m telling you it’s not worth it!” He says.

But Harry-“ “Please.” He pleads. I walk next to him but I give Draco the death glare. Ron stands on my other side and stand patiently for the class to start. Suddenly I see Father walk in, looking sharp.

“I’ve been looking forward to this class.” Harry whispers in my ear. “Really?” I smile. “Of course.” He smiles back. “So I Hope everyone had a good break! I wanted to jump into this lesson.” Father starts.

“Today, I wanted to start off with Boggarts. They are a type of magical creature that take the form of our greatest fears. To get rid of them one must say “Ridikulus!”. Now who wants to go first?” He asks.

Everyone steps back, I step back into Harry. “Sorry!” “It’s alright.” He smiles. I look behind and see Draco pushing the line up. Students go flying in every direction.

“Drop it will you?” I snark at him. He rolls his eyes. Harry pulls me away from him. Harry moves himself to stand between Draco and I. “Thanks.” I mutter. Harry smiles.

After lines of people going in front of me it’s my turn, Harry and Ron stand behind me. I hold my wand ready and Father opens the ottoman containing the bogarts. “Are you ready Ms Lupin?” He asks. “Yes.” I reply.

Father open it and the boggart comes in front of me. I had one thing in mind I was terrified of, snakes. I prepare myself to battle a snake but when the boggart takes form it’s...Sirius Black.

I look at him, his dark locks, his dark eyes, pale skin, a tattoo on his chest which is visible from his torn shirt. His tall slender figure. “Amora.” Harry nudges. I snap out of my thoughts.

“RIDDICKULUS!” I yell. Sirius Black becomes a playful black dog. I take a deep breath. I don’t make eye contact with anyone especially Father. I quickly walk to the back of the classroom and lean against a pillar. I look and see Malfoy coming at me.

“Scared of a masked murder aren’t we?” He mocks. “Move along little git. At least I’m not afraid of my own father.” I spat. “You take that back!” He snaps. “I don’t regret my actions Malfoy.” I sneer.

“Well you should bc your not a very smart girl.” He snaps back. I push myself off the wall and towards his snide face. I point my wand at his chin. Which spell should I use? How about the slug spell he used on Ron last year? A bit of pay back. Hm.

As soon as I open my mouth to say the spell someone pulls me back. I turn and see the frizzy haired Hermonie. “What are you doing?! You could’ve gotten expelled!” She shrieks.

She lets go of my arm once we’re away from Draco and his followers. “Wait Hermonie When did you get here?” I ask dumbfounded. “What are you talking about Amora? I’ve always been here!” She says smartly making me feel delusional.

I could’ve sworn she wasn’t here a second ago. Right sorry.” I add. “Let’s watch Harry.” She says dragging me towards the front of the line. Harry stands there in deep thought. I wonder what his fear would be? He always seemed brave and certain in anything.

It wouldn’t be you-know-who? I sudden shiver goes down my spine. The boggart takes shape into a Dementor, I stumble into the wall but Ron and Hermonie steady me.

Harry is pushed to the side by Father who stands in front of Harry. I rush to Harry and Ron and Hermonie follow behind me. Father looks straight at the Boggart, who takes the form of a moon, for obvious reasons, him being a werewolf.

“RIDDICKULUS!” He yells. The moon becomes a white ballon which Father traps in the ottoman. He turns around swiftly. “Well that’s all the time we have today. I will see you all tomorrow.” He says turning around towards his desk.

Many people murmur about wanting a turn but I avert my attention to Harry. “Are you alright?” I ask. “Erm yes.” He responds. He looks at my father and then the three of us.

The bell rings and I grab my bags. Harry is walking towards my father and I start following him but Ron grabs me. “Amora it’s best we leave him be. He will join us later.” Ron says.

“But he’s clearly not okay.” I respond. “Amora if he wants to tell us. He will.” Hermonie says. I walk out of the class room with the two of them. We turn into the stony corridor and I feel two arms sling around my shoulder.

“Hello!” George says. “Little Amora!” Fred says. I smile. “How’re you classes?” I ask. “They were good since none of them had Slytherins. And no Snape. Well until the end of the day.” Fred explains.

I nod. “How were your classes?” George chimes. I recall my day, in the library with Draco, the nagging, the dementor, and Sirius Black.

“Let’s just say it was an...interesting day.” I respond. Fred questions my response. “Why is that?” He asks concerned. “It’s just a lot going on.” I respond briefly. “I’m sorry for that.” Fred responds. I shake my head.

“No it’s fine.” I lie. He gives me his crooked toothy smile. I return it with a small smile. “Hurry up will you?!” A fifth year, one of Fred and George’s friends call. “One second Johnson!” George calls. They both exchange glances and give me a tight hug.

“We will see you around.” Fred promises as he walks into the lunch hall. “We will see!” I joke. He winks and walks away. I slowly walk towards Ron and Hermonie who’s noses are stuck in a newspaper.

“What are my two favorite book nerds up to?” I joke sitting next to Ron. “A new Sirius Black sighting. Not far from..Hogsmade.” Hermonie mutters. I feel my breathing and nausea happen, I look at my plate of food and feel like breakfast is coming up.

Suddenly Harry sits on my left abruptly. He looks calm and a little solemn. “What’s wrong?” I ask. “Oh nothing.” Harry lies. I raise a brow.

Harry leans closer to my ear. “Not here. Gryffindor Common Room. 12am.” He whispers in my ear.

“What about Ron and Hermonie?” I ponder. “We will tell them...later. Just trust me on this. And if Gryffindor Common Room isn’t empty at 12am then we will wait till 1am or 2am. Just trust me please. It’s important.” He pleads.

“Ok.” I promise. He takes a bite of chicken and drinks pumpkin juice.

End Of Chapter 4 Comment your thoughts and if you want to participate in the challenge comment where Hermonie went, if you answer correctly the next chapter will be dedicated to you :)