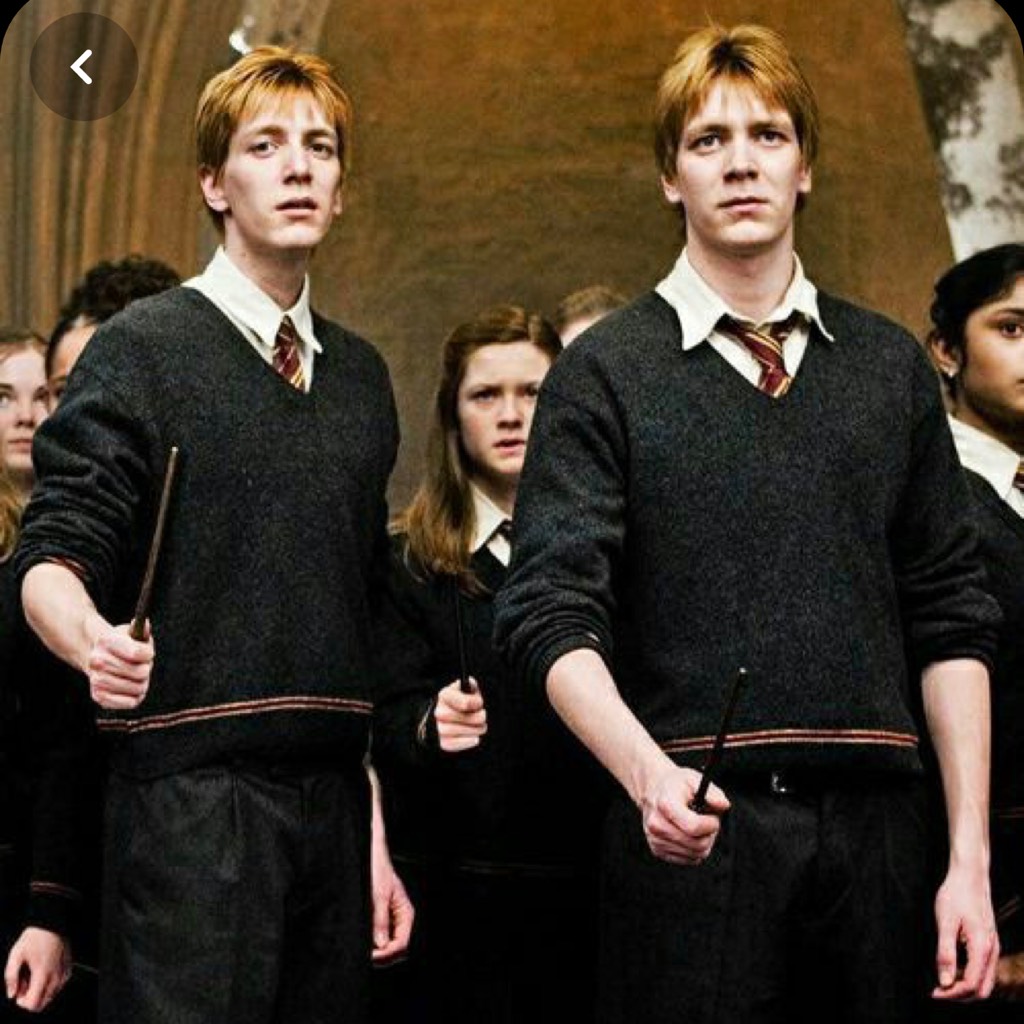 lochness8 I post avenger fanfics and HP fanfics
Autoplay OFF   •   a year ago
Transcript Use Images
Before you read any new chapter from my series make sure you’re caught up with the other bc I don’t want the story to be spoiled for you guys! Please read them in order!! This is long but enjoy!! :))
fanfiction harry potter-weasley-draco

Everyone started pouring out of the Great Hall. I dodged my way to the pillar at the end of the crowd. I can’t believe this. What do I do. Maybe I should just go to common room?

“Are you lost?” A voice asks from behind me. I turn around and find Luna Lovegood. I’ve talked to her briefly before. “No...um are you?” I ask. “No I just wanted to make sure you weren’t.” She replies.

“No I’m not, but thanks.” I say. “Gryffindor Common Room is that way.” She says pointing down the hall. “Yeah I’m not in Gryffindor anymore.” I say sadly walking towards the dungeons.

A bunch of Slytherins cast me side glances and I heard many murmurs. “Where are you going?” I turn around and find Fred looking at me concerned. “What are you doing here?” I snap back. “I was setting off a dung bomb in Flinch’s office.” He says.

“Where’s George?” I ask. “He’s with Lee they wanted to get Flinch’s face on camera.” Fred says. That’s not going to end well. “What are you doing here?” Fred asks again. “It’s a long story.” I begin. Fred grabs my arm.

“I’ve got time.” He says. “Apparently I’m in Slytherin.” I say. Fred furrows his brows. “What do you mean? You’re a Gryffindor you’ve always been a Gryffindor.” He says. “Well due to my new heritage I’ve been put in my rightful house.” I bark.

“No.” I reply. In the distance I heard a yell and running footsteps. “Oh no.” Fred says and runs off in the opposite direction. I watch as he runs away, I wanted to run with him. I wanted to set pranks. But no. I can’t.

I walked into the common room which smelled like money and expensive perfume. All heads turned when I walked in and many people broke into whispers. Some people yelled thinks like “What’s this prat doing here?”.

I believe the Prefect Girl What was her name?....Alison right. She stood up. “Amora Lupin is here because she was transferred.” She speaks. Many people started whispering again.

“Treat her like our own. If I hear any bullying you will be reported to Snape.” She yells. Alison turns to me with her bright intent blue eyes. “Your dormitory is third to the left.” With that she spins on her heel and walks away.

I roll my eyes and walk into the direction she states so snobbish. The rooms where very grand, green, black and silver. I opened dormitory three and it was huge.

It was empty, I took the bed that had my stuff on it and put my trunk under my bed. As soon as I sat down the door opened up and Pansy Parkinson and two other girls walk in. Pansy had her skirt hiked up and loads of makeup on.

She glares at me and sat in her bed. “So anyways as I was saying, Alison had this whole scandal-“ I tuned out as she spoke of crush drama. I took out a piece of parchment and a quill and started writing to father.

As I was signing it Pansy snatches the letter. “Who are you writing to Lupin? Boyfriend of yours?” She asks. “No Pansy haven’t you heard she’s dating Potter.” A blonde girl says. She had green eyes and long pretty blonde hair.

She also had her skirt hiked up and she wore too much makeup as well. “Is that true Lupin?” Pansy interrogates. I look up at Pansy. “I heard a rumor Draco rejected you. Is that true?” I say.

Pansy turns red. “He didn’t reject me! I dumped him!” She stomps furiously. “Ah of course.” I say. Pansy rolls her eyes. “I hope you can find your brain back there!” I call out.

“What’s Potter like?” A girl asks. She had thick long brown hair and hazel beautiful eyes. “What do you mean?” I ask. “What’s he like?” She asks dreamily. “Lexi has got a thing for hero’s.” The blonde girl says.

“I love how heroic they are.” Lexi says. I look at her concerned. Was she for real? “Anyways why did you get transferred?” The blonde girl asks. “Apparently The Sorting Hat was wrong.” I lie.

“It’s never been wrong before.” “There is a first time for everything.” I push. The blonde girl looks at me with...sympathy? “Well if you stick with the right people, you’ll be fine.” Lexi says.

I nod and look out the window, I wasn’t going to sleep. I grabbed my book and walked into common room which was semi deserted besides a few people.

As soon as I sat down I felt someone staring at me. I looked up and say Draco from across the sofa. I ignored him and looked down at my book. “So Lupin.” He begins. “I never thought you’d end up here.”

“You say it likes it’s a prison.” I sigh. “Well if you act like the jerk you are it will be a prison.” “I’m not a jerk.” I bark back. Draco studies me for a moment. “Why do you hate Slytherins?” He says.

“I don’t hate Slytherins! I don’t have any of my friends here. I don’t have Harry, Fred, George, Ron or Hermonie. I’m alone again.” I mutter. “What about me? Are we not friends to some extent?” He says.

He had a point Draco and I could sit in the same room together and not kill each other. “I guess I’m not all alone.” I conclude.

***** “GET YOUR HANDS OFF MY STRAIGHTENER!” Pansy screams. I jolt out of bed what was going on? Pansy, Lexi, and blondie were running around mad. “Where is my makeup?!” Blondie screamed.

I groaned and got up, I made my bed and changed into my new Slytherin robes. “Aren’t you going to finish getting ready?” Pansy snarks. I look in the mirror, my head was in messy waves. “Nah I’m presentable enough.” I shrug.

“You look you got in a fight with a werewolf.” Pansy says. When the word leaves her mouth I feel all of my air deprived from my lungs. I shoot her a death glare and walk out. If only she knew, if only.

I walked down the steps and into the dark halls. I was starving. “Oi Amora.” Someone calls. I turn around and find Draco walking up to me. “Morning.” I call. “Where are you off too?” “Breakfast...duh.” I remark.

“I wanted to invite you to sit at my side of the table.” He says. I stare at him for a minute. “With Crabbe and Goyle?” I say. “I know they seem...bad but once you get to know them they aren’t so bad.” He says.

“No offense but I doubt that.” I say. Draco crosses his arms. “Where are you going to sit then?” “The Gryffindor table.” “Oohh. You’ll get picked on bad by Pansy if you do.” He says.

“I don’t care what she says. I’ll see you around.” I say running to the Great Hall. When I reach the Great Hall I find my friends and sit in between Harry and Fred. “Morning.” I say. I give Harry a kiss and dig into my bacon.

“Really no explanation Amora?” Hermonie begins. “You all heard. I’ve been transferred theirs nothing I can do.” I say sipping my coffee. “But this is wrong.” Fred says.

“Thanks for stating the obvious Freddy.” “Amora you can’t be serious.” Harry says. “There’s. Nothing. I. Can. Do.” I stress. “You can ask Dumbledore-“ “He doesn’t care.” I bark.

Hermonie looks at me weirdly. “What.” “I can’t believe you aren’t going to do anything about this.” She says. “Hermonie I can’t do anything!” I bark. She looks at me sadly.

Suddenly my watch buzzes, great I’m late for class. “Ok I’ll see you guys around.” I say. Harry leans down and kisses me. After a moment I break away and run off to class.

I had potions. I turned into the darkly lit halls. I enter the classroom and all the seats are taken but the one next to Draco. I set my stuff down and he looks at me. “What’re you doing here?” He asks.

“Why is this seat taken?” I remark. “No I was actually saving it for you.” He says nonchalant. He twirls his wand in his hand. “Thanks.” I say. He looks at me and nods.

“No I didn’t.” “That’s impossible you share a dorm with Pansy.” Draco scoffs. “What can I say? I tune them out.”

******* “George I swear.” Fred yelled. I laughed, their silly plan wasn’t going to work. “Freddy.” I call. He looks at me very frustrated. He and George have been trying to get this aging potion done for over an hour.

“It’s a pinch of slug slime.” I complain. These two honestly, they didn’t listen to a thing I said. “Amora it’s turning-“ “GREEN! Yes that’s good!” I exclaim. “Look Hermonie it’s going to work!” I say Turing to face her.

She’s focusing on someone in the crowd around the goblet of Fire. “Hermonie?” She snaps out of her gaze and looks at me. “Hm? Oh....yes that’s great!” She says rather distracted.

I stare into the crowd to see who she was staring at, my eyes find Victor Krum staring back at Hermonie. That’s couldn’t be? “Oi Amora are you even paying attention to us!” George whines.

“I said you’re doing it right! It has to sit for five minutes.” I roll my eyes. George makes a face at me. “Hey I’m skipping homework for this!” I snark. Fred smirks.

“How much do we owe you?” Fred asks. “Hmm....you owe me free assistance whenever I ask.” I conclude. “Done deal.” They say at the same time.

Harry greets me with a hug. “I was looking for you in the Owlery.” He says. “Sorry I was helping Fred and George with an aging potion.” I say. “Ohh.” Harry says. “To get them over the age line.” I say.

I point to the age line around the goblet. Harry takes my hand and finds a quiet spot by the window. “Ever since we got to Hogwarts I haven’t had a chance to talk to you.” He says.

“Yeah, who knew fourth year workload is harder.” I agree. “How’s it like being a Slytherin?” He asks. “Oh well it’s you know...hard. I miss being a Gryffindor.” I confess.

Harry holds my face in his hands. “It isn’t the same without you. I know it’s only been a week but I miss you.” He says. He leans down and kisses me.

After awhile we break apart. “I haven’t taken you out on a proper date yet.” He says. “Hogsmade is in three days, maybe then.” I say. Harry kisses me again and then I go help Fred and George who’ve managed to wait for me patiently.

“Are we ready to do this?” George says. “Yeah drink drink!” I usher. Fred’s eyes light up and they chug their small potion bottles to the last drop. They look at each other.

End Of Chapter 15! Hope you liked it! Please comment me your thoughts! Laters!