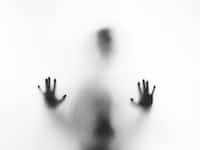 The next day, Alyn was rather quiet. She quickly ate, then left for school. At the same time, Kirabella looked tired and her eyes had a sign that she had been crying. Everyone had heard of the incident, but strangely, the nurses weren't doing anything. They all knew Miles had manipulated them though.

After dinner, Akiso was passing through the bedrooms when he saw Alexei lying on the floor. He rushed over to him. "Are you okay?" He asked him. Alexei didn't respond. "Alexei!" Akiso cried, slapping his face. He didn't wake up. He got up and paced the floor. He wasn't an expert in healing, but he knew someone who could. He didn't want to ask them, but it was desperate.

He picked up Alexei and carried him towards a broom closet. Akiso took a deep breath in and spoke in a voice that was unlike his. "Norie. I awaken you." The broom closet grew in size, got rid of the supplies, and slowly formed into a spell room. An old woman with long gray hair, beady violet eyes, and a dirty white gown appeared in the middle of the room.

This was Norie, a ghost who was killed during the Salem Witch Trials. She was very experienced in healing, witchcraft and was Akiso's great-great-great-great-great-you get the point-great-great grandmother. "Akiso!" She cried. "It has been far too long!" He sighed. "I need your help." He quickly explained the situation. He also told her about Miles.

When he finished, Norie was clicking her tongue and shaking her head in disappointment. "I knew Miles. We crossed paths only once, but that was enough." "What do you know about him?" Akiso asked. Norie sighed. "He's a crafty deal-maker. He promises you no fee, only when you die, he's yours to command. He also has smart loopholes."

"If you asked for immortality," Norie pressed on, "He would grant it to you, but he would only save you from diseases and viruses. You can still get murdered. And even if you closed that loophole, you would still age." Norie strolled over to Alexei. "Now for the boy..." She placed her hand on his forehead and murmured an incantation. After a few minutes, she pulled back.

Norie stayed silent for several minutes, and when she spoke, it was barely a whisper. "Have you heard of 'The Memory Spell'?" She asked. Akiso shrugged. "It's a highly dangerous spell. It should only be used in the direst situation. When it is cast, the victim relives their worst memories. It never ends. They are stuck in that phase until they rot away from old age."

"The spell has been put on Alexei."