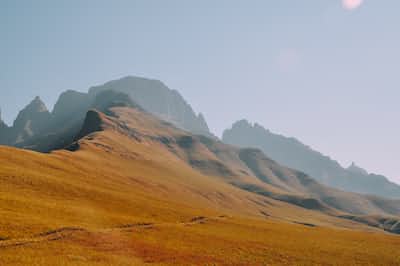 lindentrees I come from the Linden trees
Autoplay OFF   •   4 years ago
Transcript Use Images
A strange vision, perhaps a fever dream.
fiction writingdesertvoicesmusicdreamcreativeshellsmirageidkrambling

A single note was suspended in the air. A resolution without a conflict. A perfect cadence without a place.

Mystery hung in the hair of the girl, enveloping her cranium as the note swirled around and around. She felt called upon, like her mother was shouting her to come home,

or her teacher was asking her a question, or a magician was meekly asking her to accept a dangerous quest.

She stood alone on the open plain. The ground was cracked and dried and dusted with sand, much like the skin on her bare feet. It had not felt rain for many months.

Only the wind accompanied her in her search for sound.

Moving forward, she closed her eyes and listened, matching the tone with her own voice. She stumbled over the rocks and crags and pebbles.

Finally, when she felt her eyes would be shaken from their sockets, she opened them. She had double vision from the whole world jiggling about.

Her hair was being pushed back. her skin retreating. Her eye lids rearing upward. She reached down, trying to push past it all.

She startled inside herself when she saw a pair of eyes peeking out of the darkness of the deep crack at her feet.She fought to let her breath expel but it was being pushed back into her lungs.

The eyes seemed to grow wide and a hand appeared from the dark, trying to grasp at the girl. A grey face revealed itself and the girl was alarmed to see that it was herself rising from the earth.

She snatched her hand away. It was her own mouth that was emitting the sound. She reached forward to try to cover it. Snuff it out like a weak flame.

She fought the urge to be blown away. To forget this all had happened.

She put her hand over her mouth but that was not enough. The girl grew desperate for the sound to cease, her lungs starting to burn and her ears threatening to burst.

She put her arm past the grey lips and deep down into her throat, ravaging for the source. Her hand grasped and pulled.

She fell backward with the force. Her estranged self was crumbling into dust and mixing into the sand.

She held a clam shell that was sealed shut. She closed her hand tight around it and let out a held breath.