Commaful
It Got Gay at the Waffle House 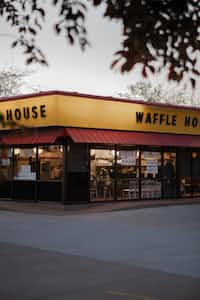 limhkayes https://soundcloud.com/kimi-haodha
Autoplay OFF   •   a year ago
Transcript Use Images
A couple of Southerners going for late night waffles get caught in a tsunami of bisexual foolishness
fiction funnywaffle housequeerbisexualbi-sexualdrag queensdragqueenswafflesstripperspolyamory

It Got Gay at the Waffle House

Our booth was sandwiched between some foreign fellows on one side drinking hot tea,

"I'm jealous." One man said to the other.

On the other side of us was a transplant Yankee girl drinking a soda with no ice. She was all alone.

She kept peeking over her shoulder toward the door and checking her phone.

We got our late-night hashbrowns and coffee and

while we were waiting for our waffles

At first it was a legion of oiled up Chippendales dancers

who sauntered in and sat with the Yankee girl

One of the foreigner fellows grinned at the development,

but the back of his companion's head seemed disinterested.

This was followed up with a procession of drag royalty

with wafts of sweet perfumes and glitter in their wake.

They met the Yankee with coos and giggles

his companion and the growing party behind us

The back of the companion's head didn't budge.

It did not move for a car crash on the highway outside.

It did not move for his hashbrowns setting fire.

It did not move when Duke and Carolina started to fist fight on TV.

But when a pretty local girl in the daisy dukes and an attitude to match said to the Yankee:

"C'mere baby, lemme get that syrup off your cheek..."

...the back of that foreign boy's head WHIPPED around, and

behind his reserved face there was a repressed fury that

He confronted the pride-parade behind us, and

gave them a fussing in the most calm

This is sorta what he said:

while you toss me and our husband aside."

He pointed to his grinning companion who was now

He continued: "Why have you forsaken my care

for such a subpar cleaning of that

syrup on your cheek that should have been

dabbed away by me?"

He pointed to the local girl accusingly:

"Would SHE read you your creepypastas at bedtime?

Are her floors or counters any more spotless than mine?

Can she sew up your clothes AND your wounds like I can?

Truth be told, the local girl could do all of those things,

as could the mountain of hired southern bisexuals pawing at the Yankee,

but they didn't care,

they were paid to make the fussing foreign man jealous

and they got the job done.

Before all three of the blushing spouses left,

they paid for everyone's waffles, hashbrowns, and tea.