Commaful
The bell struck 9, ringing loudly throughout the castle to let all know the guest of honor had arrived and the banquet could begin. Sybella was draped in a gorgeous blue gown that made her eyes pop and her waist look incredible. She stared at herself in the mirror, pleased with the reflection. She knew she was vain. There were no illusions she was under that made her think she was she was a wonderful person. 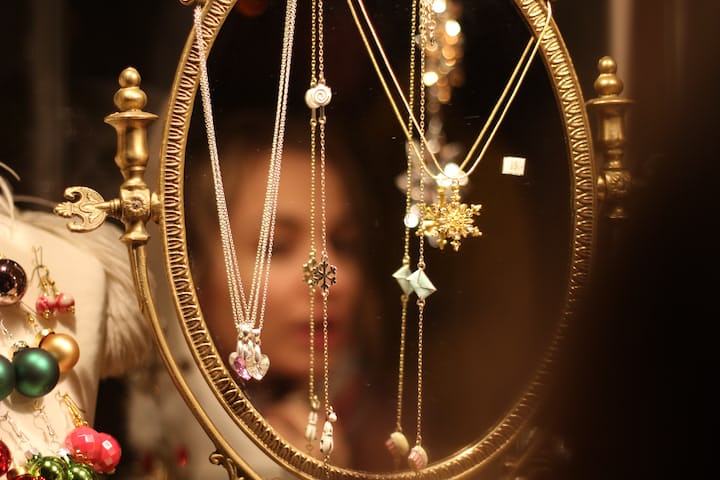 The bell struck 9, ringing loudly throughout the castle to let all know the guest of honor had arrived and the banquet could begin. Sybella was draped in a gorgeous blue gown that made her eyes pop and her waist look incredible. She stared at herself in the mirror, pleased with the reflection. She knew she was vain. There were no illusions she was under that made her think she was she was a wonderful person.

Everyone could pretend. Pretend to be kind, pretend to be rich, pretend to be someone else but in the end everyone was always just what they are. Sybella was an incredibly narcissistic, fabulously wealthy, talented, not at all modest, murderer and to some a whore. She was dainty and yet strong. Evil and somehow still good.

Sybella was whatever she wanted to be. Tonight she was the center of attention. When she entered the ballroom Nathaniel greeted her with kind words though she could tell he was uncomfortable. Later she whispered to a servant to make sure his glass was always full to help ease his tension . There were several friends of hers among the ocean of painted faces.

Lady Clarisse Laurent was among them, a treasure hunter of sorts with a good family name and lots of coin to help her go adventuring wherever she desired. They had met in several strange places, mostly tombs and more often than not Sybella assisted Clarisse to keep her out of trouble.

“I’m not at all surprised to see you here.” Clarisse said giving Sybella a warm smile. “Well I should think not as it’s my party and all.” Sybella knew no one was fooled by her cover up but that didn’t matter. All that mattered was the event itself. Despite what the court would say about her, they all loved her parties.

“Oh yes, worst kept secret in Stormhaven if you ask me.” She, of course, was eluding her relationship to Emeric and his desert queen. It was a topic hot on everyone’s lips that Queen Maraya refused to acknowledge Sybella’s presence as Emeric’s mistress. It wasn’t allowed in Redguard culture. One of the many reasons that entire country had a large stick up their ass.

Redguards were dreadfully serious in her opinion. She felt that way about most cultures actually apart from the Khajit. They seemed like a delight and she had always wondered what it would be like to be with one of the beast races. Their entire love making style must be so...primal.

The night continued with the crowd beginning to get drowsy from all the wine. Defenses were down and this was the most fun time for Sybella. She listened to the outpouring of secrets, storing them in her memory to use later. Blackmail was very effective in Wayrest. Emeric asked her to dance and they swayed until her feet began to hurt.

“You look ravishing.” He whispered as he escorted her to a bench so she could rest. “I know.” She smiled back to him. “Do you want me to bring you some wine?” He asked kindly, giving her hand a small kiss as he already headed to fetch her some. “Smart man, you already know my answer.”

Just as he was bringing her the goblet...she entered. Queen Maraya. “Well I’m surprised she came at all.” Sybella scrunched up her nose at Emeric’s comment. Maraya never attended her parties. “What is she playing at?” She stood as the queen passed her and walked right to Emeric. “Husband.” She held out her hand to him.

“Darling wife.” He took it. “Is something wrong? I didn’t expect to see you here.” “It’s late and my bed grows cold.” “Perhaps I’ll join you both.” Sybella’s words were sharp as was the look she received in return. Ah the drama, she lived for it. “I think I could show you a few things, your majesty.”

“How dare you.” Maraya said under her breath. She didn’t want to bring anymore attention to the situation for she knew Sybella would want it. To her it was an embarrassment, her proud name whispered and tangled along with Sybella’s. On the other hand nothing embarrassed the lady of misrule.

The court already said horrible things about her but it didn’t matter. The king adored her as did the world outside the castle. Their words meant nothing. “Perhaps it is time to retire for the night. Let us say goodnight to my brother.” They left her to her party. Emeric was kind to his wife. Sybella knew their friendship was strong and she had no issues with this.

She wanted them to have a good relationship. It certainly made ruling easier she would think. She did not seek to claim Emeric as her own nor did she want the commitment of a crown. She had explained this to Maraya several times but she couldn’t blame the woman for being jealous. So now she teased her.

The night began to break with sunlight and almost all the guest were gone or passed out. Sybella wandered back to her room in a daze of wine and tiredness. As soon as she stepped into her bedroom her gown hit the floor, her jewelry flew off and she flopped down onto her bed. A successful night she thought as she drifted off to sleep.