Commaful
It was late, most hunters on the boat were asleep but Ven could not shut her eyes. She lay in her hammock listening to the sound of the wind and the rain hitting the wood above her. Somewhere further down the line of swinging beds, she heard someone softly strumming a lute. It was a sad tune to match the weather. 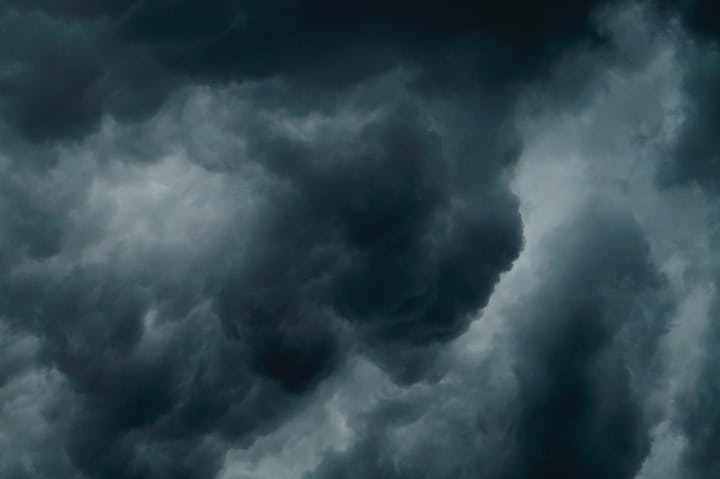 It was late, most hunters on the boat were asleep but Ven could not shut her eyes. She lay in her hammock listening to the sound of the wind and the rain hitting the wood above her. Somewhere further down the line of swinging beds, she heard someone softly strumming a lute. It was a sad tune to match the weather.

Though the music was calming Ven was still uneasy. She could tell when the weather was going to turn foul and she couldn’t shake that feeling. She tried to convince herself that there was a competent crew that would know exactly how to handle it if there was a bad storm but she always believed in doing things herself. So she was awake. She waited.

She listened and just when she thought she could relax she noticed the boat was swaying hard. The guitar strumming had stopped and she felt more tense than ever. The boat began to rock violently and the other people began to notice, some even falling out of their hammocks. Suddenly a bell began to ring.

“All hands on deck!!” Ven heard yelling. Immediately she jumped out of bed. “Everyone find a safe place to secure yourselves!” She shouted. “If you know how to sail go topside if not then stay out of the way.” She said as she ran upstairs. She noticed that as she passed Vess he had been the one playing guitar and now he was following her.

“I always play when I’m nervous.” He said as they went up another flight of stairs. “You were nervous too?” “I knew a storm was coming.” “Me too.” Together they joined the frantic crew that was trying to take control of the storm that was beginning to wreck havoc on the ship. They both listened to the captains orders and did whatever they could to help.

With wind and rain beating them down, they persevered until the ship was in the clear. After it was all over Ven found Vess sitting on the deck looking exhausted. She sat down beside him. “I haven’t been in a storm like that in a long time.” He said, taking a swig from his flask. “No casualties. Minimal damage to the sails. Could have been worse.”

“Didn’t make it suck any less.” She laughed a little at that. “Very true. At least we will both be able to sleep now.” “Yeah, especially with the help of my friend here.” He drank some more. She reached out to grab the flask and took a big swig of the stinging liquor. “Whew. That will definitely help.” She gave the flask back and stood.

“I liked your playing.” “Thank you. My mother taught me.” Vess looked down at his hands as he offered that information. “I’m Ven.” She felt he deserved that knowledge after what they had just gone through. Something had changed. They had worked together, trusted each other to do what needed to be done to help the people on the ship.

And they had worked well together as if some instinct had taken over them, something they didn’t have to think about. He felt it too. She could tell and he was grateful for her sharing her name with him. He smiled. “Ven. An absolute pleasure to meet you.” He raised the flask to her then took another drink. With that she left and returned to her hammock.

Finally she could rest. The soft rocking of the boat helped soothe her even more and she began to drift off. Just before she crossed over into sleep she began to hear the quiet strumming of a guitar. It was a different tune, a lullaby of sorts. He wasn’t nervous now, or maybe he was for a different reason but Ven knew Vess was playing for her.