Commaful
Ianthe walked the streets of Vivec City, hips swaying to the sound of the night, eyes closed and face lifted to bathe in the light of her beloved moon. She didn’t need to open her eyes to see everything. All was open to her. Centuries had passed and people always sounded the same, felt the same. She waited. She listened. 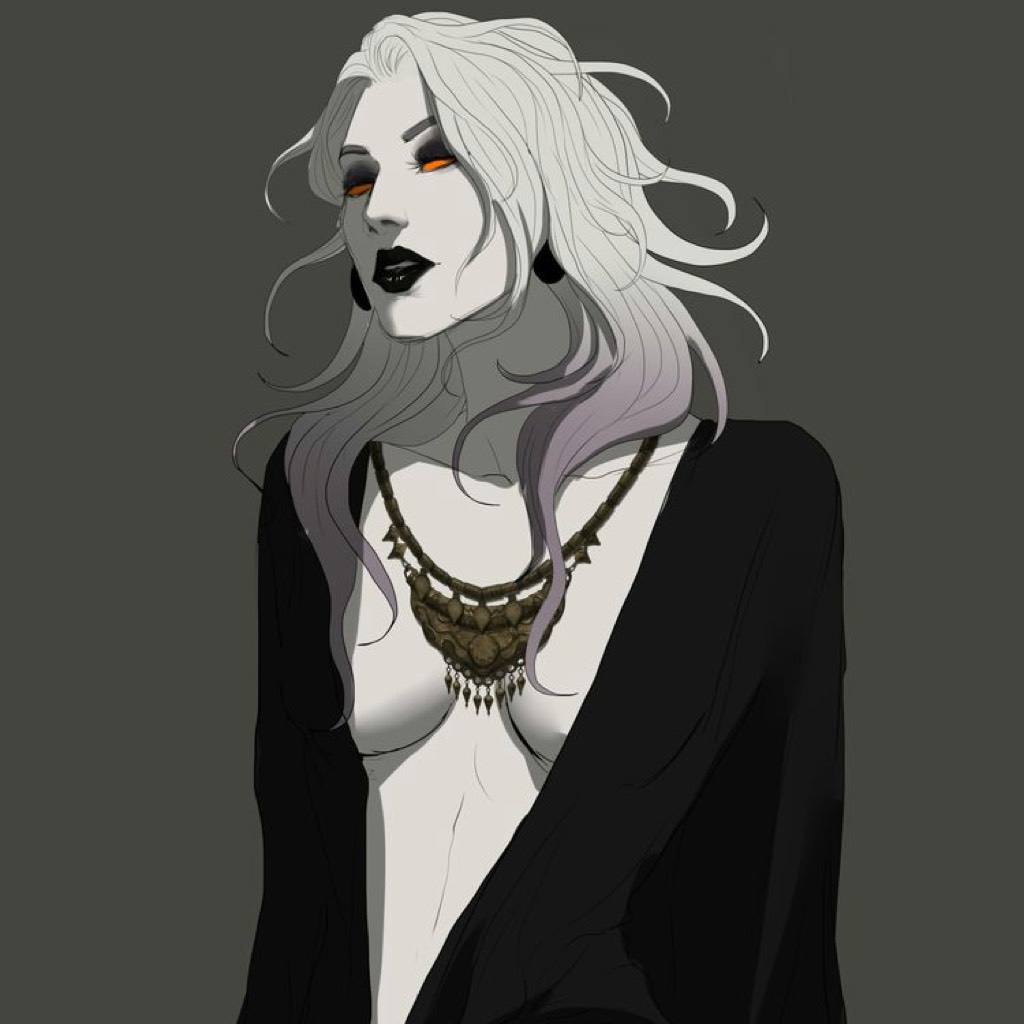 Ianthe walked the streets of Vivec City, hips swaying to the sound of the night, eyes closed and face lifted to bathe in the light of her beloved moon. She didn’t need to open her eyes to see everything. All was open to her. Centuries had passed and people always sounded the same, felt the same. She waited. She listened.

Her pointed ears twitched when they heard sounds of pain. It was a woman and she was crying out for help. Her location was all the way across the city but it only took Ianthe a blink to get there. It was another Dark Elf like herself being beaten by a male Dunmer.

The woman was on the ground, arms covering her head to protect herself and yet the male mer continued to kick and kick and kick. When again he lifted his foot, Ianthe was before him in a second, holding his throat beneath her hands and using her strength to lift him off his feet. “What are you doing? Put me down.” He struggled.

“You won’t like it when I do. When I drop you, you will be dead.” Her voice calm, smooth and yet hard like marble. The mer had panic in his eyes. “Please. Please don’t kill me! Im sorry!” “For?” “For hurting her!” “Then why did you do it?” He was silent, trying to find words and air in her grip.

“I paid her...and she tried to leave before I was finished.” “You mean she tried to run away because you were hurting her? Everyone runs away from pain you foolish man. Would you not run from me if you could?” Ianthe squeezed his throat harder and his eyes began to turn red.

She breathed in a sigh and when she released it she also released him to the ground. At the same time she gripped tight and ripped so that by the time his feet touched earth he was choking on his own blood. Ianthe turned her attention to the woman who was dying before her eyes. She could hear her heartbeat going faint.

“I am sorry I wasn’t here sooner, and I am sorry that others heard you and turned away. Do you know what I am?” The woman’s eyes flitted to the dead man in front of her back to her savior. She nodded. “Good. If you wish to pass on in peace I will stay here with you. But I can offer you something else.”

“I can make you like me. I can’t say it’s an easy way to live but I can promise I will protect you and no one will ever lay a hand on you if you do not wish it again.” “Why me?” The woman spoke with pained gasps. “It’s not a gift I give to just anyone. Only those that are forced into a life they did not want and pushed towards a death the do not deserve.”

“Will it hurt?” “Yes, but only for a moment. You’ll soon have a great many of those.” Ianthe brought her crimson lips to the woman’s wrist and bit down with her fangs. She drank a little only to put her venom in the bloodstream then she showed the woman to do the same.

After the woman finished, Ianthe directed her to the mer who was still bleeding out next to them. “Finish him yourself. Such an opportunity is rare and you should get to enjoy this on your own.” Strength was already returning to the injured woman’s limbs as she crawled over to drink her attacker. Ianthe watched as the light left his eyes.

“Very good, new one.” She helped her stand. “How do you feel?” “Still a little weak but better. Better every second.” “Hold on to me and we will go to your new home. Tonight will be difficult as your body dies and reforms into something new but don’t fear. I watch over all of my children.”

And with a puff of black smoke they were gone. Ianthe did not leave the new vampires side as she began to sweat with fever and spoke softly to her of her new beginning. “Sleep now. When you wake you shall see the world with new eyes.” And so another joined the Queens court and loved her forever.

Ianthe, the Mistress, Queen of the Night.