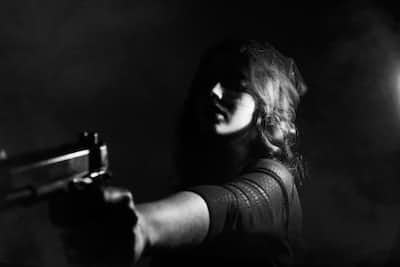 Silence surrounded me as I stepped off the train.

In a place where I was used to being swarmed by noise upon entering, nothing could have thrown me more. Despite how tightly packed the crowd was, I was given a wide berth.

The faces around me glared –

Children shouldn't be punished for the crimes of their fathers.

Yet there I stood, knowing what they were thinking.

The thought filled my head with thunder and my eyes with rain. I shielded my face, set my shoulders back, and quickened my pace. The echoes of my footsteps crashed against the suffocating walls.

The words haunted me. I could feel my hands shaking. Shaking because of what? Grief? Fear? Rage? Or the knowledge that my father killed three men in cold blood?

But was it really the reporters I was angry with? No. At least I don't think so. They were just earning a living. Honest work for honest money.

Angry with my father, the murderer?

Angry with my mother, the whore?

Angry because I had only ever fallen for one man.

Angry because he turned out to be one of her lovers. One of her three lovers. Her three recently murdered lovers.

Because in a fit of jealous rage, my father killed them. All of them. My father, the murderer.

I needed a way out. I had to escape.

After an eternity of climbing stairs, I reached the exit.

Or so I thought.

"How are you coping with your father's arrest?"

"Have you been visiting him?"

"Do you believe he attempted to bribe the judges?"

"Has it affected your personal life?"

Cameras flashed in my eyes until all I could see was white.

Microphones were shoved in my face. Eager reporters crowded around me. Was it never to end, this constant bombardment? Was I never to be something other than my father's daughter?

I knew she wanted to shield me from as much as possible.

But it was too little, too late. Any remnants of innocence lurking within me had been shattered, and my life would never be the same again.