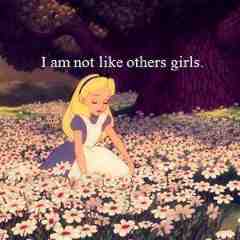 That's what society wants me to say.

They want me to alienate myself.

To betray my gender, To transcend Her,

To ignore who I am,

To build fences and walls, Accept the offences,

The cacophonies of sexist condemnations.

"There is shame in being a girl."

That's what society wants me to think.

To think, to think, Rethink and doublethink.

To ponder the so called truth behind their con...

Duh! It's a crime to be feminine.

Or bowers of flowers.

Look how they glower As I point out the imperfections,

The failings in their wailings.

Look how they flail when we assail.

When we stand up for ourselves.

When we defend until the end,

As we upend their wrongdoings. Their abuses

That's what society wants me to believe.

That being a woman is an offence.

That I am only respected if I distance myself.

Do not misperceive their preconceived insistence.

Drown out their voices.

Your existence is not an inconvenience.

You are loved and valued. You can make your own choices.

Your voice is heard!

Vow now to be proud That you are like other girls.