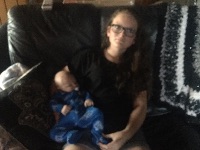 January eighteenth was when the first murder happened.

Reginald Arthur Kane was the victim.

The town of Arden was shaken to say the least.

Little did they know, they had a serial killer on their hands.

My name is Nathaniel Carter, most people call me Nate, or Nathan... Some call me Weirdo.

I grew up with Reginald. He was one of my best friends.

And I was the one that found him dead.

He was in the school's boiler room.

His throat cut and his eyes missing from his head.

The sick calling card of a deranged killer.

Everyone told me I should talk about it. That I shouldn't bottle it up.

It became a place of misery.

A cesspool of sheer horror.

A town surrounded by the threat of death.

She was killed the same way as Reginald.

But not just her eyes were missing.

So were her fingernails.

No one was safe,

From the Arden Slayer