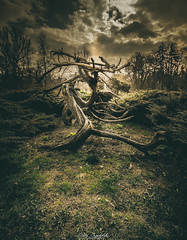 jaimejonejone Community member
Autoplay OFF   •   3 years ago
Transcript
“Where’s dad?” my sister asks, her breathing still intense. Her pupils grow wide, her stare billowing deep into me. How do I tell her what happened? I still don’t believe it myself. I take off my hat and hold it against my heart.
By Max Masen http://postapoclit.blogsp...
thriller

“Where’s dad?” my sister asks, her breathing still intense. Her pupils grow wide, her stare billowing deep into me.

How do I tell her what happened? I still don’t believe it myself. I take off my hat and hold it against my heart.

She takes in a deep breath and a strand of tears beats down her face.

I grab her shoulders and she raises her head. Her eyes glow. “What do we do?” she asks.

“Dad’s gone. But we can still follow through with the plan.” I raise my body slowly and I peer over the concrete ledges. A patrol goes by, light shining in my direction.

I shove my body back down and press it hard against the concrete.

“What was it?” she whispers curiously.

“Patrol. We need to move. Can you run?” I ask, examining the bruises lining her left leg. Her eyes match mine and she looks at her own leg.

“I think so,” she says. She tries to raise her body, growing it to a crouch, but the pain is too much for her to bear. She falls back and her body hits the concrete.

She shudders and just barely restrains herself from releasing a yelp.

I hear footsteps. They’re moving intently in our direction. “Shit. They’re coming this way. We need to move.”

“You need to,” she says. Her body is plastered unreluctantly against the concrete.

“What do you mean?” My eyes grow wide. My throat dries.

“You know what I mean. We aren’t both getting out of here.” A look of acceptance grows on her face, an aura of serenity overcoming her. “But you can.”

“We aren’t seriously discussing this right now,” I reply, disregarding the notion angrily. “I can throw your shoulder around my back and carry you. I can-”

A voice is heard close by, yelling for us to come out. They’re close.

I take off running, adrenaline taking the place of thoughts of regret or sadness. I keep running until my chest hurts, followed by pains in my calves. Is that screaming?

A gunshot. Echoes chasing behind me violently. I keep running. The pain subsides. I feel nothing.

My feet slow down until they’re barely moving. I fall to my knees, the skin scraping hard against the ground. But I don’t feel it. I raise my head and scream into the dark of the night.

I need to run. They’re too close. I won’t escape now.

“There’s one there!” one of them screams. He raises a rifle, aiming it at me carefully. More close in from behind him, and three move from the other side.

Then I hear more from behind me screaming to the others.

I close my eyes. This is it.

No pain overtakes my body. I feel nothing. I open my eyes and a light surrounds me. A man stands before me, holding his hand out for me to grip.

I reach mine out to meet his and he pulls me to my feet.

He smiles and says, “You’re safe now. Your father and sister arrived shortly before you.”