Commaful
We are the world! 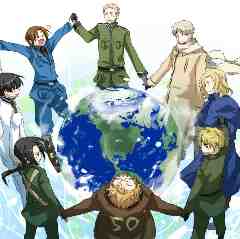 ivoryannalise Happy Pride from this bisexual <3
Autoplay OFF   •   5 years ago
Transcript Use Images
The world is a cruel place. There is no denying it. With the stereotypes fitted to each country, it's hard to fit together in a single world. But somehow...we all manage too.

We are the world!

Since when did the world become such a cruel place?

Guns being pulled and children being betrayed.

It breaks my heart...

To know that difference between us is used to break us.

Automatically evil. But why?

Since when did race, nationality, religion, and gender define us?

We are all different.

All uniquely beautiful. All our own persons with nothing to define us.

And yet, the world is still a cruel, heartbreaking place!

We are still defined by things that we cannot change or choose not to change.

Don't let them define you!

Stand up and shout! Be proud of who you are and all that makes you...you!

Because no matter what...

Nothing can truly define you.

I do not own any pictures!

All pictures are from or are fanart from a Japanese anime called Hetalia. The show is about the countries who are the cliche people of their country.