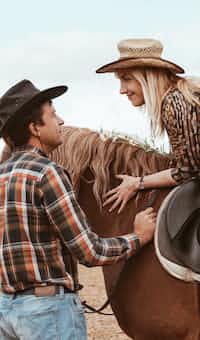 inspartion Missing the one I never thought I would
Autoplay OFF   •   4 months ago
Transcript Use Images
Part two of a western story collab I wrote with my great friend @charminggeek43!
westernactionhonorromancenarrative craziest action stories

There he was, sitting in his chair outside his office, supposedly deep in thought. Mae watched from across the street, hidden in the shadows in a crevice between two buildings.

Every now and then the Constable Downes's eyes would sweep across the street, searching for something, or perhaps someone. Then again he would stare at a random point, thinking.

"Does he do this every evening?" Jonathan asked, looking over his sister's shoulder.

"I don't know," Mae answered, her eyes wandering over to the mountie again, observing every detail. His red suit was buttoned up with shiny gold buttons, and his brown boots were tied tightly.

Every time someone wandered by he would dip his hat politely, scanning them as they went. It was quite peculiar, really, as if he were searching for someone he couldn't seem to find.

Jonathan shook his head. "Why does the dumb mountie have to be right by da bank? He'll hear our every stinkin' footstep!"

"Ever think that's why the jail office is there? Isn't it a mountie's job to catch criminals?"

Jonathan huffed, stalking away. Mae knew she should probably go too, but her legs thought otherwise, staying planted on the ground.

Her eyes strayed towards Constable Downes, still rocking back and forth on his old wooden chair, and still watching those who roamed the streets.

And then Mae decided to do something so utterly stupid; emerging from the shadows and walking by the row of buildings.

Before too long Constable Downes spotted her; jumping up from his chair and hurrying towards her.

"Excuse me, Ma'am!" he called, stopping Mae in her tracks. She spun towards him, raising an eyebrow. Though she hated to admit it, he was quite handsome up close.

"Yes?" she asked, but Constable Downes just stood there, staring. Mae shrugged and turned around, walking away without a thought.

"Wait!" Constable Downes scurried up the stairs onto the platform running from building to building, composing himself. "I'm sorry; Ma'am, but may I see your notebook?"

Mae tilted her head. "May I ask why?"

Constable Downes forced a smile, holding out his hand. "Ma'am, please hand over the notebook. If you don't cooperate, I'll have to take it forcefully."

Mae rolled her eyes, handing over the notebook, empty of any notes. She watched as the mountie flipped through the clean pages, a crease forming between his eyebrows. "Find anything?" she teased.

Mae shook her head, flashing a playful smile. "Mae. It was a pleasure meeting you on such... interrogative circumstances. But I'm afraid I must go."

She then turned and walked away, a smile playing on her lips. She was tempted to turn around, but she just kept on going, her empty notebook in her hand.

Her notes were all written in her old one, the one her brother took with him to read.

The temptation overtook her, and Mae turned around to see the mountie standing there, watching her. She gave a tiny wave, smiling again.

But she turned around again, shaking her head and scolding herself, not quite sure what had gotten into her. Maybe it was just the fresh smell of spring in the air, or maybe it was more.

A thought formed in her head, but she shook it away, pushing the encounter far from her mind for the rest of that day.

The constable's mind was officially a hot mess. Nothing made sense: the empty notebook, the secretive yet open facade, the woman mindlessly walking into the darkness.

Where the hell did she come from anyway? To Waylon it was like she was sent to confuse him, a job well done then. What a woman she was... Not only very pleasing to the eye, but charming. Smart.

Alluring. The dumbest thing to be thinking at the time, when he should've been suspecting her. It was hard, really.

She looked so innocent, wielding a charisma of some sort and had nothing in the notebook. Darn, she was nothing like the bad girl with the book and the attitude the townspeople spoke of.

Mae was her name? Thankfully he remembered, as he probably looked like an idiot to her. He ignored that and started loading his revolver patiently.

He smiled at the first bullet with the extra jacket of gunpowder and loaded it, the first shot of defense should be a powerful one.

He loaded the next bullet with a dent on the bottom, made by his blade, because the next shot should be impossible to miss.

He kept the express ammo on his belt at all times, for he knew he needn't kill anyone unless he really needed to, which is why he avoided the regular ammo that hit too hard.

Well, he was done protecting the town from nothing all night. No need to pull the hammer down that time, but he couldn't rest.

He went to the gunsmith the next morning, because his sidearm's rifling and fire rate were a bit flat. "Morning partner, I'd like you to polish Ol' Beth again if you don't mind."

The curly haired and frighteningly calm gunsmith carefully took the sharp silver revolver with a pearl grip. "Of course, sir."

He shot the constable a conspicuous glance while looking down to apply the gun oil. Waylon just shot him a demanding look back. "What is it?" The gunsmith looked down to start rubbing.

"With all due respect Mr. Downes, that woman you let go might've been the spy." Waylon frowned and leaned onto the counter, "You think I don't know that?" "No, not at all sir. Just... She matches the description, and came from nowhere."

The constable felt dirty at that moment, and just looked to the floor. "I know..." "Well I just wonder what made you let her go."

He got sick of it, impatient, that woman already had bruised his ego with him letting her go but this was salt in the wound. "Are you done with my sidearm for all this talk?"

"Y-yes sir, here you go." He took and checks the revolver's ammo with no expression and turned to leave. "Have a nice day now, I might come back for ammo."

The puzzled gunsmith just stood there speechless as the constable made it to his office, as he needed the time to think.

Jonathan eyed his sister, fingers drumming thoughtfully on the notebook. Mae sighed, her eyes darting around the camp.

Everyone from her brother's gang sat there expectantly, occasionally raising an eyebrow in question. She knew sooner or later they wouldn't be so patient.

"Fine!" she exclaimed, raising her hands in surrender. "I'll do it. But after this I expect a good share of that money."

Jonathan nods, a smile playing at the edge of his mouth. He was always pleased when Mae gave in, and it only made her want to back out. But that wasn't how it worked around here.

You make a decision, there's no looking back. "And that you will get. But only if this works."

Mae let out a frustrated sigh, abruptly rising from the log, ignoring the chuckles that escaped a couple men's lips. She stalked away, her mind spinning in circles.

Stupid people. Stupid plan. Stupid mountie. Stupid life. Everything around her was simply stupid, including herself. She shook her head, mounting her horse and grabbing the reins.

She thundered off, her braid untying itself in the wind and letting the blond strands go free. And her mind, oh her mind, it was free too.

Free of whom she was back there; finally allowed to accept who she could be. Relief washed over her as wind stung her cheeks but felt refreshing nonetheless.

This was what her life could be, who she could be. A liberated woman, ridding through meadows and valleys and watching her life unfurl in front of her in wild, unprecedented folds.

A life she simply didn't have the ability to live. Reality.

She huffed and tilted her head back, staring into the evening sky. Pinks and oranges had started to invade the azure sky, tinting the clouds with hints of color.

"Why?" she shouted, her voice bouncing along the pine trees around her. She couldn't change what she had gotten herself into. Besides, there was no way out of it. This was her life.

This was her legacy bestowed on her by her brother. If she had to get close to Constable Downes and get him to trust her, she would.

If she had to distract him in order to get him away from the scene of the crime, she would. It was the only way to regain some, if any, meaning to her life.

And if it had to be a crime, then that's the way it had to be. She would follow her brother's plan and deceive that mountie if it was the last thing she did.