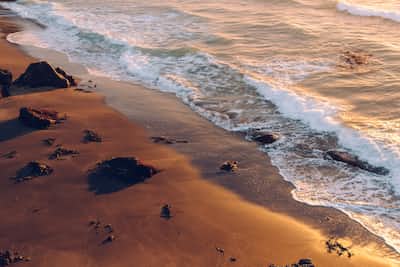 inkspotz Fanfiction.net and Wattpad writer
Autoplay OFF   •   3 years ago
Transcript
A honeymoon for a newlywed couple doesn't go according to plan.
thriller shortstorybash17

She started up in bed; her eyes opening to look at the pitch black room. Snoring content beside her was her new husband. He was completely undisturbed by her jarring awake.

Slipping out of bed, she wrapped herself in a nearby bathrobe. Padding quietly across the room, she moved to open the balcony and stepped out onto it.

The salty tang in the air reached her from her perch on the balcony; her eyes scanning the midnight blue ocean that lapped at the sandy shore several stories below her.

She listened to the repeated crashing of the waves before registering steps behind her.

“I'll be back to bed soon,” she remarked.

She laid on the sandy ground several stories down; pained eyes gazing upwards into the darkness. The balcony was barely visible in this light. Pain radiated through her body.

She could feel the metallic taste of blood leave her mouth as the world faded.

The clapping of the waves was all she heard before the world became nothing.

He sat in the hospital chair; bottom sore from being rooted there for so long. His eyes still stung from all his crying. His new bride was dead. She was dead.

After he wiped his eyes for what felt like the hundredth time, he cast his eyes upwards to look towards the morgue doors at the end of the hall. It was then that the tears froze.

Standing in front of the doors was what appeared to be a transparent version of his deceased wife.

It had to be a mirage. There were no such things as ghosts. He stood slowly from his chair, walking ever closer to the mirage. Sweat became beaded on his brow.

“What do you want?” He asked. All the ghostly version of his wife did was point at an emergency phone that was hanging off the wall nearby.

“Call? You want me to call?” The ghost still didn't reply – still pointing at the phone. He took steps towards it before pausing in front of it.

He felt a chill race through him then. Closing his eyes, he felt as if he were bleeding. Gritty sand lay under him like a bed sheet. Above his eyes was darkness and...a face.

He picked up the phone with slick hands; fingers seeming to be numb as he dialed. He caught the ghost out of the corner of his eyes, and gripped the phone tighter. He was starting to cry.

In the jail cell, he looked up at the gray ceiling above him. He sat up slowly on the cot when he felt someone staring right at him.

It was her again. His eyes filled with fright, backing up on the cot. “I did as you asked me to,” He said to the ghost in the corner of his cell. “I turned myself in. Please...just leave me be."

A ghostly finger pointed right at him. He didn't understand.

The chill raced through him again. The balcony boards beneath his feet prickled the soles of his feet at his touch. The black ocean before him lapped at the shore.

Then footsteps sounded behind him. He turned…

The guard came to give him his breakfast the next day, and he was lying on the floor. Opening the door, the guard went in after calling back up.

The man used that element of surprise to his advantage.

He was out the door seconds later. Then in the car. Then at the beach. It was almost as if the indent of his wife's body still lay in the sand.

Tearing past the main desk in his prison garb, he tore up the stairs to their room. The receptionist behind the desk reached to phone the police.

Reaching the room, he elbowed his way inside. The maid inside let out a shriek as he moved to the balcony. He leaned against the rail, closing his eyes.

Footsteps sounded behind him.

The maid. It had to be the maid. He opened his eyes; his wife's face before him. Again she was pointing. She was pointing behind him.

The sound of the footsteps stopped.