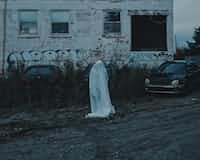 inklingpen nothing much to know about.
Autoplay OFF   •   5 months ago
Transcript Use Images
After a decade of waiting, Alan the ghost was finally able to begin to solve his and his family's death. But the person handed over to him was unexpected. Why her? Why does it have to be her?
thriller thrillerghostparanormalmurderlost ghost

Alan sat on the bench in the kids' playground, heaving a loud sigh. It's not like he's frustrated because his kid doesn't want to leave the playground, in fact, he had no children of his own.

All of the children scurrying across the playground were somebody else's responsibility, not his. No one could even see him.

He was a lost soul whom nobody really cared about, since nobody could see him. He closed his eyes and wondered again for the umpteenth time why he chose to stick on the human world.

He was a ghost, after all. Somebody who needed to be returned to the spirit world. But he couldn't.

After his prejudicial death, he couldn't bring himself to go when his family got massacred too.

His father, mother and brother already went to the specter world but he felt like putting justice to him and his family's unjust death.

At the same time he was contemplating on why he was still there,

an aloof girl with chestnut brown hair was following her mother when she stopped to chat with a woman who he guessed is a friend; the little kid scanned the whole area and stopped

to lock eyes with Alan.

He felt that somebody was staring at him and looked around 'til he saw the little child looking directly at him.

The little girl waddled towards the bench Alan was sitting on and the feeling that he got was indescribable. To finally find someone who can help you with your dire situation, but...

A child? A pure innocent child? To help him find the culprit of the slaughter? He doubted the little being in front of him.

But then again, after all those years staying in the human plane, she was the only one to see her.

Even people who claimed to be 'clairvoyants' couldn't even see him, and he laughed at such foolishness,

Weakly muttering the words, she spoke "Hello mister, I am Amethyst and I just noticed that you look lonely. Can I help you?". Clearly, this kid doesn't interact much.

It took a while for Alan to process what Amethyst said. And when he did...

He realized the child had seen him and he could not let him get away. She was the key to solving his tragic incident.

After a decade of waiting, his cold case was finally opening. Slowly but surely...