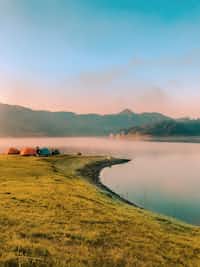 Just to remind you, Cailen just came out of her tent and is looking around at the camp outside -Mai

It was beautiful. In a big circle were lots of other tent houses like the one I had just come out of, but each one seemed to be personalized in a different way.

There were plants everywhere and not too far in the distance I saw a sparkling lake. Everywhere I turned, I saw smiling faces.

People were laughing as they carried water from the lake, and the youngest kids were chasing each other around as they played a game.

I was so immersed in my picturesque surroundings that I didn't even notice Sarah, along with two other girls around my age, walking up to me.

"Hi, um, I just noticed that I never asked for your name." Sarah realized as she approached me.

I laughed, feeling light as I still took in the beauty around me, "Sorry, I'm Cailen. Who are you?" I asked, looking at the two girls.

"I'm Elle," the one said. The first thing I noticed about her was her hair. She had short wavy hair cut at her chin with streaks of red, blue, and purple throughout.

Her outfit was very similar to mine, except much more worn with small holes in both her shirt and pants. She reminded me of a fairy.

"And I'm Bay," said the other. She had long straight brown hair with matching highlights as Elle. She was also a bit taller than both me and Elle and had several piercings lining her ears.

Dirt dusted her hands and the knees of her pants. Like Elle, she reminded me of some kind of woodland creature, but harsher. I immediately liked both of them.

"They'll be showing you around our camp. They are also both pretty experienced in telekinesis, so maybe they can even teach you a little bit." Sarah explained.

After she walked away to help make dinner, Bay and Elle both shared a look and grinned.

"Oh my god, we are so excited to show you around!" exclaimed Elle as she bounced up and down.

"There's a lot to see so we better get started!" added Bay as they both grabbed my hands and pulled me throughout the camp.

They introduced me to many people who all smiled and said something short before I was pulled along to the next activity.

We went to the eating area which had a bunch of picnic tables surrounding a campfire. They took me to the garden, farm, and finally the lake.

When we got to the lake, exhausted from running around the entire camp, we collapsed on the ground in a heap.

"Soooo, what did you think? Pretty great, huh?" Bay asked as she dipped her fingers in the water and swirled it around.

"It's beautiful," I answered, still overwhelmed, "I've never seen anything more amazing." Both of them beamed.

"I do have one question though," I added, "How do you all go unnoticed? With so many people wanted by the government here, you think that they would have found you guys by now."

"Oh, it's actually really cool how this all stays hidden!" began Elle

"Do you see the very slight shimmering in the sky above you?" asked Bay as she pointed to the sky. To my surprise, when I looked above me the air almost looked wavy.

It stretched across the lake and as far as I could see through the camp.

When the government scans this area for us, they can't see or detect anything and if someone came through the woods, they wouldn't be able to enter unless someone inside bent it to let them in.

"Once we are able to control our powers a bit more, we each contribute a little bit into the force field to keep it strong.

" Bay included, "This camp started out very small and as more people joined they were able to increase both the size of the camp and the force field."

As I continued to look around me in amazement, I saw one of the few people I hadn't been introduced to, walking over with a bucket.

"Hi Sky!" Both girls called to him. In response, he lifted up his hand to give a half-hearted wave.

He then avoided coming over to us and went further down the lake to fill up his bucket with water. This was weird.

Everyone I'd met here immediately introduced themselves to me as soon as they realized that I was new. Also, the boy wasn't with anyone else.

Everyone I had seen today was at least with their partner, if not in a larger group with other people. I decided to ask instead of continuing wondering about it.

"What's his deal?" I pointed at the boy.

"Oh, that's Sky. He only came here about 4 months ago and he is... still adjusting." Elle said as she uncomfortably played with some grass in her hand.

"It's been very hard for him to adjust because, before he made it here, he...

he lost his partner," Bay and Elle shared a look, "He won't share any details, so we don't know much about what happened.

But, when Sky arrived he had his Anima's dead body in his arms and refused to give him up. Eventually, Sky eventually passed out from exhaustion and we were able to bury his partner.

" Bay fidgeted and wiped the lake water off her hands before standing up and helping me to my feet as well. Clearly, neither of them wanted to talk about it anymore.

I simply said, "Oh," before standing up and following both of them back to camp.

Clearly this was a sensitive subject, and I didn't want to press it any further, but I was still curious about what had happened to Sky.

I didn't even know Asher and I couldn't imagine how painful losing him would be. Luckily, I could still feel his presence in the back of my mind.

If I paid attention, I could almost feel him thinking. It was kind of weird but also reassuring to know he was still there and okay for now.

"Come on!" the girls called. I didn't realize that I had fallen behind them when I was thinking. I quickly ran to catch up.

"Let's go so we can get a good seat for dinner!" Elle grinned as she began to run ahead. Bay and I followed her into what was about to be a very eventful dinner.

Once again thank you so so much for reading this! It means a lot to me that there are people who are reading what I’ve been working so hard on for the past 4 months! -Mai