Commaful
Bottom of the Stairs 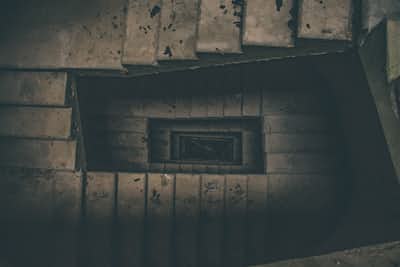 genaervin genaervin.weebly.com
Autoplay OFF   •   4 years ago
Transcript Use Images
Something strange is happening at the bottom of the stairs. It's probably nothing, but it could be something really sinister.
thriller darksuspicious

Bottom of the Stairs

I saw him standing there. Right outside the door of what I thought was an abandoned building.

He didn't seem to notice me in the dark.

He bent down and started to drag something inside. Something big and heavy wrapped in a black plastic bag.

He dragged the bag around a corner and down some stairs into the basement.

The bag made a thumping noise all the way down Thump, thump, thump

I peeked down after him and waited until he was clear before descending myself.

I walked down carefully until I reached a point where I could see.

There was already a deep hole in the basement.

One of the steps creaked

"Hey, Dad. Have you seen Jessica?"

"Not in the last hour or so, hon. Are the two of you still fighting?" "Not really," I said. "I just wanted to apologize before she goes home."

"I see. You can hang around here and help me fix up this old building, then."

"Just some tools I need." His face changed to something unfamiliar. "If you're not going to help me out, then go back outside. I don't want you to get hurt."

I nodded and went back up the stairs, but I could swear I saw the bag move again followed by brief muffled screams. I've been told I have an overactive imagination, though.

I never did find Jessica. I guess she went back home.